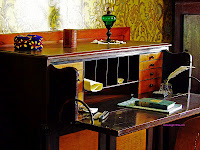 Yes, my friends, a tenth desk blog has been found!

I was very tempted to name Canadian Poets Petting Cats as the tenth, but as someone who's tried to write on a good number of cats, I can tell you that it's wholly impractical.

It was a tough decision to leave the cats off the list but ultimately my restraint and patience paid off. For only a couple weeks later Sheniz Janmohamed has taken up a desk blogging project as part of her Writer-in-Residency over at Open Book Toronto (yes, if you're keeping track at home, that's two different desk blogging projects at OBT - the other being "At the Desk").

The new series, which will be running through this week, is called "On The Writer's Desk". You can read the first post, in which Janmohamed writes about her own desk, here, and you can follow her future posts on other authors' desks via her Writer-in-Residency main page.

I'm still not entirely clear about how this series will differentiate itself from OBT's "At the Desk". Still, I'm not overly concerned about that. If this desk blog counting project celebrates anything, after all, it's redundancy! Oh, and desks!

What Is Your Ideal Space to Create?

On The Writer's Desk

For the second time this year I find myself moving the goalposts on this little project. Let's aim for twelve desk blogs by the end of 2012, ok team?

Bahaha! I just found this...count on me to be redundant! I'm actually getting writers to describe one object on their desk and why it's there/where it's from, so hopefully it won't be too similar to the other blogs out there...

Thanks for the promo too!

And I love the Canadian poets petting cats thing...I should find a cat and pet it.

I'm glad you're entertained! And I look forward to your series (I'm not just a desk blog counter, I'm also a reader ;).

Re: redundancy I think your object-description idea is a new one for the desk blog industry. I didn't think there were new niches to be found anymore, so congrats on that! :)

And I agree re: CPPC. I'm petting a cat right now and waiting expectedly by the phone...

Thank you so much re: the non-redundancy! Let me know if you want to contribute an object for the series. I would love to read your book as well. I was recently in Vancouver performing at the Indian Summer Festival.

Sorry I didn't know you earlier, it would've been great to meet.

I gotta find me a cat!

Stay inspired and great being in touch!

With the construction going on at my house these days I'm lucky if I have a desk, let alone objects on it...

But I hope the project goes well, and do drop me a note if you're in town again.

Just wish to say your article is as surprising. The clearness in your post is just great and i can assume you are an expert on this subject. Well with your permission let me to grab your feed to keep updated with forthcoming post. Thanks a million and please carry on the rewarding work.

Ok, I know that last comment was spam. But when the spam is so stunningly accurate (especially the "expert on this subject" part), how can you not let it through?

my desk is a project in itself. It is such a big project that I need to get away from it to write. :-) And by *away* I mean leaving my house. That far away. :-) Now you got me thinking about the objects.

wow. you get such nice spam, Rob.

"with your permission let me to grab your feed"
is my favourite. definitely a fan. do you think that was referring to cats somehow?
HA.
carry on with the re-wording work.:-)
(sorry, could not resist.)