roll of nickels year in review: the interviews

In 2016 this blog didn't die, no one wrote an open letter about it, and it wasn't cast off in a surge of right-wing populism, so I'm putting it down as a good year. On top of that, 2016 was Roll of Nickels' 10th birthday, and we celebrated by trimming half its name and going out and buying it a slick new baby-blue wardrobe (complete with sideways tree).

This year also saw a four-year high in posts, spurred on by my BC Poetry 2016 feature in April (a new BC poetry book profiled each day) and my endless, shameless promotion of my new poetry collection, The News. Along the way I added 46 new quotes to my ever-growing (almost 400 total!) list of quotes on writing, and bombarded my readers, Vancouverites and (poor, sweet) non-Vancouverites alike with local event announcements.

The most fun for me, though, and increasingly the reason I keep this blog running, were the interviews. I conducted seven this year, right on my yearly average since 2012. I know, loyal reader, you've read them all in great detail. But in case you, too, have a toddler and can't remember what you ate for breakfast, let alone the interviews you read in March, here's a refresher:


January 2016: For Heavensake I Don't Have in MFA in Feelings: Kingdom by Elizabeth Ross

"I guess repentance is an aesthetic, too." - Elizabeth Ross

""Never again" has also shown itself to be a promise that is true for some and not others." - Juliane Okot Bitek

March 2016: Outside of the Rhetoric: Dagoretti Corner by Ngwatilo Mawiyoo

"As far as I can tell we’re not yet at a place where “African poetry audiences” are necessarily aware of poets across the continent." - Ngwatilo Mawiyoo

May 2016: Maybe Memory is Just Part of the Event: serpentine loop by Elee Kraljii Gardiner

"Aren’t all of us always outside some language? Isn’t being a human a constant act of translation?" - Elee Kraljii Gardiner

June 2016: When You Embrace the Power of Not Caring, Everything Rhymes with Orange: Country Club by Andy McGuire

"The leathery Ohioan I saw every day at the pool led my spirit-animal entourage." - Andy McGuire

October 2016: Christ In Heaven, Isn't That The Most Depressing Sentence You've Ever Read?: Caribou Run by Richard Kelly Kemick

"Christ alive, these are difficult questions. What ever happened to, “Do you write with a pen or pencil?”" - Richard Kelly Kemick

October 2016: Juggled Casually in with the Ordinary Messy Rest of It: The Fire Extinguisher by Miranda Pearson

"I suppose writing this book was a way of fighting back, wrestling back some control. Me holding a fire extinguisher of poems up against all that, saying “get back!”" - Miranda Pearson


Thanks once again this year to PRISM international for simultaneously posting my interviews on their site. You can read all my interviews (forty and counting!) in one long stream here, or pick some out from an alphabetized list here.

No comments:
Email ThisBlogThis!Share to TwitterShare to FacebookShare to Pinterest
Labels: personal, year in review

The next Dead Poets Reading Series event will take place at the Vancouver Public Library's Central Branch on Janaury 8th, 2017, from 3-5 PM. (Due to flooding in the Alice MacKay room, the reading will be held on the library's 3rd floor in the "L3 Program Area").

Attendance is free. For more info, visit the DPRS website.

I hope to see you there!

I think one of the ways poetry is so vital and, by proximity or extension, myth, is how it can witness and then respond to our times with a metaphorical translation. I’m really interested in how poetry can assert another species of narrative into the conversation with its imaginative design and construction. And how it asserts wildness back into language. Poetry reminds words of their fur and their hoofs, of their seaweed and their hurricanes and, in the same way, reminds us of the more complete version of ourselves. In this way, it’s a crucial lifeline and energy source for a variety of kinds of languages: visual, sensual, emotional, political, animal, botanical, aquatic, astronomical. The list is endless and poetry is the host inviting us to a collective conversation where anything is possible. To that end, there’s a vulnerability involved in being in the proximity of poetry, of being comfortable not knowing the lay of the land but going forward anyway, whether it’s reading poems or writing them. These are good things to practice right now, I think. Crucial, even.

- Sue Goyette, in interview with Hannah Green over at CV2. You can read the whole thing here.

Vancouver Sun Review of The News

I appreciate so many parts of the review (including the disclaimer "Clearly no baby shower material"), but my favourite part comes at the end:

His charming and insightful blending of life and death, memories and premonitions, often catches the reader off guard with casual offhand profundity.

As a slide-show of the state of mankind it is both endearing and alarming but always chillingly authentic. Thanks to his poetic directness we are emotionally with him and his family all the way.

The Sun being a member of Postmedia, the review also turned up in the Vancouver Province, Calgary Herald, Edmonton Journal, Saskatoon StarPhoenix, Windsor Star, Ottawa Citizen, Montreal Gazette, whatever Canada.com is, and something called WN.com, which decided to pair the review with this photo of a demon clown:


Please think about this demon clown the next time someone tells you media conglomeration and a proliferation of fake news sites are destroying the healthy flow of information. There is hope and beauty everywhere, if we only look.

Thank you to Christopher, and to the Sun, for giving space and time to a poetry book. I feel incredibly fortunate.

not everything gets written down

A reason to broaden the definition of political is because each individual is different, and our poems will necessarily reflect that. In a democracy, that seems to me to mean that those who must write as witness to the savagery of, say, war should do so — that’s part of the record of what it means to be alive right now in 2016. So too, though, is the intimacy between a parent and child, so too is the agony of private despair that can blind us to what also counts as part of life — joy, in its myriad forms. To be alive has never been one thing, any more than a period of history is. At the same time, people are complex creatures, and we manifest our sensibilities in many ways. Writing is just one of them. Which is to say, speaking for myself at least, my poems are simply how one aspect of my sensibility gets enacted; other parts might be manifest in how I dress, or interact with others, or by the hobbies I choose. Not everything gets written down, nor does it have to be. We should no more make assumptions about who a person is, based on that person’s poetry, than we should be assuming how they should write, and about what, based on who we think a person is.

- Carl Phillips, from his essay "A Politics of Mere Being" in the December 2016 issue of Poetry Magazine. You can read the whole thing here.

There are countless aspects to a self; race and sexual orientation are only two of them, it seems to me, neither the least nor the most  important. It’s more accurate to say there’s a constant shifting of  hierarchy, depending on any given moment in experience. Am I a gay black man when roasting a chicken at home for friends? Sure. But that’s not what I’m most conscious of at the time. Am I necessarily, then, stripped of political resonance at that moment? Or is not the sharing of food with others a small social contract analogous to the contract of giving and taking — of interaction — that we call citizenship in a democratic society? Is this a stretch? Can we only be political when we are speaking to specific issues of identity, exclusion, injustice?

Resistance might be the one thing that governs what we think of as political. And in that light, I’d hardly call roasting a chicken a political act (unless perhaps I were to roast a chicken and serve it defiantly to my vegetarian friends ... ). But who determines what the things we choose to resist should be? We’ve heard the term “politically correct” forever, it seems. But increasingly there seems a push to be  correctly political. How this translates is that there are a small group of things that we — by which I mean poets of outsiderness, of whatever kind — are expected to write from and about, and it comes down to an even smaller group of identity markers (race, gender, sexual orientation, as I’ve mentioned), when in fact there are so many aspects by which identity gets both established and recognized. This is in no way to say that the identity markers I’ve mentioned aren’t immensely important; they just aren’t solely important.

- Carl Phillips, from his essay "A Politics of Mere Being" in the December 2016 issue of Poetry Magazine. You can read the whole thing here. 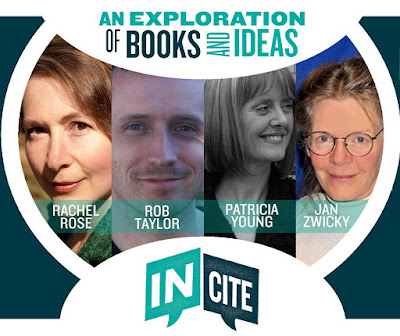 I'm thrilled to be taking part in the Vancouver Writers Fest's Incite Reading Series this January. I'll be one of four poets reading at the opening event of the 2017 season. The details:

1. That list of names is alphabetical! Rose, Taylor, Young, Zwicky. It's like they did that thing where your high school teacher picks names from the bottom of the class list, just to shake things up.

2. That list of names!!! I'm incredibly fortunate to read with these three. It will be especially meaningful to me to read with Jan Zwicky, whose Lyric Philosophy was an important guide for me during the writing of The News (and one of the reasons I sought out Gaspereau as a publisher).

For regular attendees of the series, please note that this event will be held across the street from the usual venue (the VPL) in CBC Vancouver's Studio 700. The VPL's lower floors are still being cleaned up from the flooding back in September (Dead Poets will be relocated again, too, for the same reason).

I hope you can make it out to the reading. Even if you're sick of hearing me read, the rest of this lineup will be worth putting up with me for a few minutes!