When it rains, it pours. A few days after announcing the discovery of desk blogs number eleven and twelve, along comes number thirteen. Lucky thirteen! After all this dreaming and hoping! Now I know how Stephen Harper must feel. 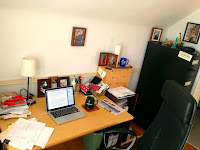 The latest is a big one, too: The New Quarterly, Canada's premiere square literary magazine, has taken up a "Writing Spaces" feature on their website. Started at the end of August, it has thus far featured desks from Ayelet Tsabari, Kevin Hardcastle, and Brent van Staalduien.

Thank you for entering the fray, TNQ!

Here are the mighty thirteen:

On My Desk [Defunct: Archived Here]

What Is Your Ideal Space to Create?

On The Writer's Desk

Where Do You Write to My Lovely?


I simply cannot get enough pictures of desks!

Keep hunting for more, deskblogmaniacs! We'll have fifteen any moment now, and twenty won't be far behind. And oh what a spoil of desks we'll have then!
Email ThisBlogThis!Share to TwitterShare to FacebookShare to Pinterest
Labels: community, deskblogamania