The Al Purdy A-frame has been saved! 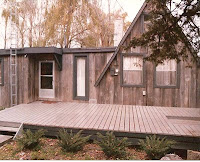 You can probably see see my grin all the way from Canada.

Congratulations to Jean Baird and all those who helped her make it happen, especially Eurithe Purdy.

They now need funds for upgrading the building and setting up the writer-in-residency, so there are still opportunities to donate if you haven't yet done so.

A NEW LIFE FOR THE AL PURDY A-FRAME
Work now turns to RAISING FUNDS TO UPGRADE AND INSTALL a writer-in-residence
October 26, 2012
For immediate release

AMELIASBURGH, Ont. – The A-frame home built here in 1957 by the late Al Purdy, one of Canada’s greatest poets, and his wife, Eurithe, has been assured of preservation and a continued vocation as a place for writers to gather and work.

Thanks to the generosity of Eurithe Purdy, who dramatically reduced the asking price for the property, and donors from across Canada, the A-frame was acquired on October 9 by the Al Purdy A-frame Association, a newly incorporated national non-profit organization with a mandate to promote Canadian literature and Canadian writers. A major benefit is planned for Koerner Hall in Toronto on February 6th to continue the restoration of the A-frame.

“Now we can turn our attention to the next phase of this effort,” said Jean Baird, president of the association. “It’s not only a celebration of Al Purdy’s legacy, but a mission to educate today’s students on the value and worth of Canadian literature, and to preserve the Purdy home as a retreat for future generations of Canadian writers.”

The A-frame, a lakeside cottage in Prince Edward County, was the centre of Purdy’s writing universe and one of the most important crossroads on Canada’s literary map. In their 43 years residing there, the Purdys hosted a who’s who of Canadian authors: Margaret Laurence, Milton Acorn, H.R. Percy, Michael Ondaatje and hundreds of others.

The association plans to begin work on upgrading the property immediately, and hopes to have its first writer-in-residence installed next summer and working in local schools by fall 2013.

The association gratefully acknowledges the generosity of all donors to the project to date, including writers, poets, publishers, academics, students, booksellers, librarians, lovers of literature and, especially, Eurithe Purdy, who was crucial to the success of this effort.

Fundraising efforts continue and are critical to the next stage of this project—upgrades on the property are required and the association will be building an endowment. Online donations are being accepted through PayPal at www.alpurdy.ca, or cheques may be sent to:

What a great way to enter the weekend!
Email ThisBlogThis!Share to TwitterShare to FacebookShare to Pinterest
Labels: al purdy a-frame, community

Phew. Check off list.
All that hard work you put into it too. So glad it paid off.