The News on the CBC

Things I expect when promoting a book: tweets aplenty, some blog posts, a poster here and there, and a lot of sweat and desperation amounting in not-terribly-much. This weekend, for reasons unbeknownst to me, the CBC decided to laurel The News with a couple unexpecteds.

Leading up to my Vancouver book launch, and subsequent mini-tour, Sheryl MacKay interviewed me for CBC BC's weekend morning show, North by Northwest. You can listen to that interview here:

Sheryl had read the whole book (!) with attention and care - and had even picked out the poems she wanted me to read. It was a dream interview.

Then that night the dream kept going! The CBC BC web team picked up the interview and turned it into a news article:

Vancouver poet writes a poem per week during wife's pregnancy

The article popped up on the CBC BC webpage, right below the Canucks game highlights... I'm now expecting a flood of Canucks fans, demoralized by the team's first regulation loss, to turn up at my launch on Thursday.

In summary, thank you to the CBC! And dejected Canucks fans, here's the launch info one more time: 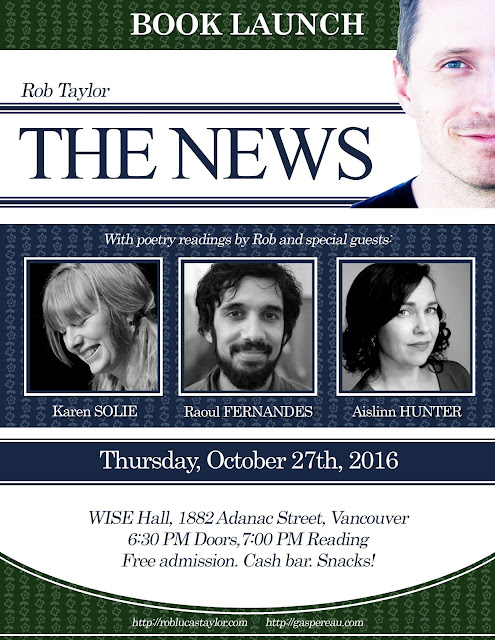 Email ThisBlogThis!Share to TwitterShare to FacebookShare to Pinterest
Labels: personal, The News