On Tuesday, May 14th (Election Day, BC - vote early!) Leaf Press will be launching its Spring 2013 titles. Leading up to the launch I'll be featuring a poem a day from each of Leaf's three new poetry collections.

The heart is getting shit-faced. Can’t hold the gaze
of tetchy waitresses, bartenders. Cleans its pocket knife.
Sharpens fork tines. Just because. Tests irony. Stiff upper
lip and downing another round. The heart is doing a bit
of pickling, a bit of self-preservation. Has never been so
wrought. Likes it straight-up, no chaser.

The heart curses brownnosers and hacks. Writing
rhyming verse. Crayoning a do not disturb sign in loopy
cursive. Dotting the “i” with a tiny balloon you-know-what.
The heart sits at sidewalk cafés, tries to check out passersby.
Can’t be bullied into anything. Marches to the beat of–
self-sufficient. Solo.

Wants to blow. Wants to get off. Shoots down every tin
image in its likeness, every plastic facsimile, every tissue
paper cut-out. Turning tricks. Picking scabs. The heart is
back on crack. It’s schlepping. It’s tonguing scissors.

The heart will stay on the line for the next operator. Will
await further instruction. Needs a convenient paradigm
shift. Wants to take responsibility for its actions. The
heart sings on caffeine. Thinks empowerment.

The heart’s skinny dipping. It’s gone fishing. Glib. Glee.
Its dancing shoes are on. It’ll never be a wallflower. It’s
kicking up dust. Wants to get this party started. The heart
blesses all who populate its corners. It’s on a camp-out.
It’s sleeping under the stars. The heart has never surfaced
more queer.

Emilia will be launching Surge Narrows on May 14th, along with collections by fellow Leaf authors Daniela Elza and Leanne McIntosh. The details: 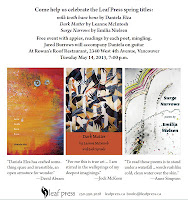 
Check back in tomorrow for another Leaf Press poem!
Email ThisBlogThis!Share to TwitterShare to FacebookShare to Pinterest
Labels: community