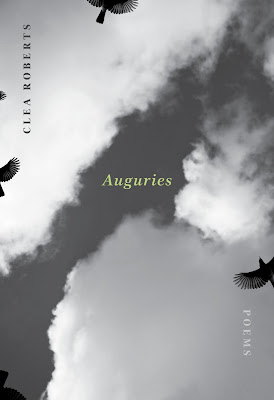 Clea Roberts lives on the outskirts of Whitehorse, Yukon Territory. Her debut collection of poems, Here Is Where We Disembark (Freehand Books, 2010), was a finalist for the League of Canadian Poets’ Gerald Lampert Award, was nominated for the ReLit Award, and was translated into German and Japanese. Clea’s poems have been published in journals and anthologies in Canada, Europe, the United States, and Australia. She facilitates a workshop on poetry and grief through Hospice Yukon and is the Artistic Director of the Kicksled Reading Series.

Whether speaking of erotic love, domestic life, spiritual wilderness, or family entanglements, the poems of Auguries are saturated with their northern landscape. Roberts is well versed in the distances and dynamics between tedium and ecstasy, light and dark, isolation and solitude, freeze and thaw, flow and stillness. Her poems are spare and clean, each like a single larch in an immense white plain; their exactness startling and arresting. As the Gerald Lampert Award jury citation for her celebrated first book noted, “Her images... are not only crisp and precise, but manage to speak about the physical conditions of this place and its emotional landscape in one and the same lyrical breath...”

Written during a period in which Roberts both became a parent and lost a parent, the poems in Auguries lend themselves to prayer, surrender, celebration, reconciliation, meditation, and auspice.

“Clea Roberts writes poems of clear, quiet beauty. They contain the silence of perception: alive to the world with open eye and open heart.” — Anne Michaels

Purchases: From the Brick Books website or at your local bookstore. $20.

Brick Books * About This Series * More Books, Please!
The copyrights of all poems included in the series remain with their authors, and are reprinted with the permission of the publishers.
Email ThisBlogThis!Share to TwitterShare to FacebookShare to Pinterest
Labels: BCPoetry2017, community, review

Thanks for these micro reviews Rob. Clea is signed up to read at Twisted Poets as well. Save the date: October 26th, 2017 @ the Cottage Bistro. Feel free to add that to your Where? section.