BC Poetry 2017: "Next Door to the Butcher Shop" by Rodney DeCroo (Nightwood Editions) 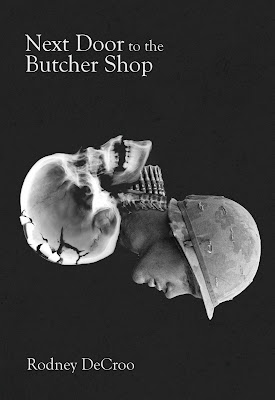 Rodney DeCroo is a Vancouver-based singer/songwriter and poet. Born and raised in a small coal mining town just outside Pittsburgh, Pennsylvania, he has called Vancouver home for years now. He has released a previous collection of poetry, Allegheny, BC (Nightwood, 2012) and seven music albums that have received critical acclaim in Canada, the USA and Europe. Music critics have named him one of Canada’s best folk/alt-country songwriters.

Next Door to the Butcher Shop explores the permeability of memory and uncovers heart-wrenching beauty from shadowy grit.

How quickly age
descends on us. Our memories are maps
to places that don't exist. I was an emperor
on a green lawn wearing a white sheet
and a paper crown. The birds sang my praises
from the hedges and the trees

DeCroo unsentimentally recounts moments suffused with grief, longing and loss, and offers a refreshingly unfiltered view of one's self.

In a deft combination of lyrical and visceral imagery, Next Door to the Butcher Shop offers a rare, sharp, first-hand perspective of life around the edges, with dark comedy dispersed throughout.

Purchases: From the Harbour Publishing website or at your local bookstore. If you're in Vancouver, Rodney recommends People's Coop Bookstore (and I do too!). $18.95.

Nightwood Editions * About This Series * More Books, Please!
The copyrights of all poems included in the series remain with their authors, and are reprinted with the permission of the publishers.
Email ThisBlogThis!Share to TwitterShare to FacebookShare to Pinterest
Labels: BCPoetry2017, community, review