BC Poetry 2017: "Dear Ghost" by Catherine Owen (Wolsak and Wynn) 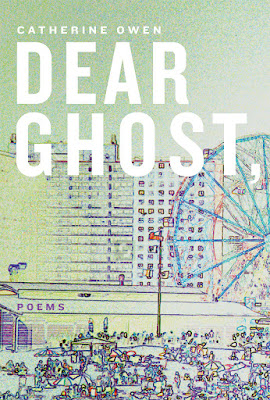 Catherine Owen is the author of ten collections of poetry and three of prose, including her compilation of interviews on writing called The Other 23 & a Half Hours: Or Everything You Wanted to Know that Your MFA Didn’t Teach You (Wolsak & Wynn, 2015) and her short story collection, The Day of the Dead (Caitlin Press, 2016). Her work has been nominated for awards, toured Canada eight times and appeared in anthologies, as well as translations. She has been employed by both the Locations and the Props department in TV land, plays metal bass and has two cats: Solstice and Equinox.

Dear Ghost is an extended love letter to her poetic influences and to the real-world objects, people, places and situations that fascinate her. Inspired by the work of John Ashbery, among others, in Dear Ghost Owen returns to the kooky imagery and humorous style she last visited with her award-winning collection Frenzy. These poems entertain immensities of sound while plumbing the depths of the psyche’s surrealities, content to enter a dreamlike realm where meaning is found in the nonsensical, the utterly human and the everyday. While Owen gathers her subjects from the mundane – work, sex, acquaintances and art – she imbues them with the extraordinary quirks and uncertainties that only language can create, and the effects are dizzying.

Book Launches: April 22 in New Westminster (Bed Lectures Series). May 4th in Vancouver at The Main. May 19th in Hamilton, Ontario. May 23rd in Kingston, Ontario.

Purchases: From the Wolsak and Wynn website, or at your local bookstore. $18.

Finding meaning in the nonsensical. Kookiness.

Wolsak and Wynn * About This Series * More Books, Please!
The copyrights of all poems included in the series remain with their authors, and are reprinted with the permission of the publishers.
Email ThisBlogThis!Share to TwitterShare to FacebookShare to Pinterest
Labels: BCPoetry2017, community, review, Wolsak & Wynn

Thanks Rob! More details on the "Dear Ghost," tour can be found here!