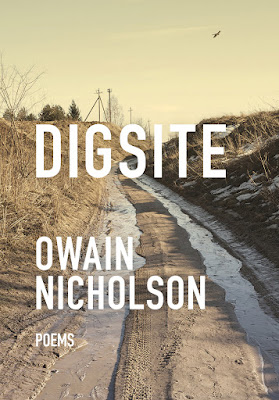 Owain Nicholson grew up in Winnipeg and studied both creative writing and archaeology at the University of Victoria. A working archaeologist, Nicholson sees history, ancestry, nature and people at the centre of both practices, and his poems often use the digsite as a source of image and metaphor. Digsite is Nicholson's debut collection of poetry. He currently lives in Toronto.

Digsite draws on Nicholson’s experience working in the Alberta oil sands and arboreal forest, taking an archaeological lens to its subject, and in this way, reimagines tens of thousands of years of human existence. These poems grow from a schism between the current place of living and the ones in which we are pulled back to, in particular, the places we no longer occupy.

Nicholson’s language draws on his archaeological and fieldwork background as he burrows and grinds the places we have lost, consistently underpinned by the grief that must accompany such a fervent exploration. In these discoveries, Nicholson presents us with the material remains of our own abandonment, of loss and acceptance, and ultimately leaves us with more questions than when we began.

Purchases: From the Nightwood Editions website or at your local bookstore. If you're in Toronto, Owain recommends Type Books. $18.95.

Nightwood Editions * About This Series * More Books, Please!
The copyrights of all poems included in the series remain with their authors, and are reprinted with the permission of the publishers.
Email ThisBlogThis!Share to TwitterShare to FacebookShare to Pinterest
Labels: BCPoetry2017, community, review