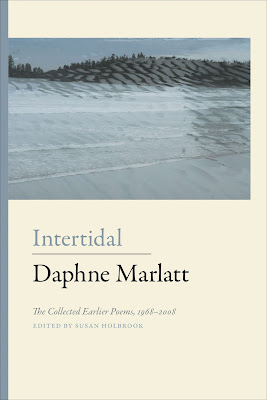 Daphne Marlatt was born in Melbourne in 1941 and spent much of her childhood in Malaysia before emigrating to Canada in 1951. Marlatt was at the centre of the West Coast poetry movement of the 1960s, studying at the University of British Columbia and with many of Donald Allen’s New American Poets, most notably Robert Creeley and Robert Duncan. Much of her postmodernist writing would be attuned to the adjustments, struggles, and accomplishments of immigrants. While Marlatt attended UBC (1960–1964), her literary associations with the loosely affiliated TISH group encouraged her non-conformist approach to language and etymological explorations.

An early member of the avant-garde TISH group, which turned Canadian poetry for the first time to a focus on language, Marlatt’s career has spanned five decades and a range of formal styles and concerns. Intertidal: The Collected Earlier Poems offers Marlatt’s perceptual and Vancouver-centric work of the 1970s, her feminist writing of the 1980s, her later collaborative work, and her explorations of environment. Intertidal collects a broad selection of this poet’s groundbreaking work, including poetry from sixteen published collections and a number of previously unpublished or uncollected poems.

Purchase from the Talon Books website or at your local bookstore. $49.95.

Talonbooks * About This Series * More Books, Please!
The copyrights of all poems included in the series remain with their authors, and are reprinted with the permission of the publishers.
Email ThisBlogThis!Share to TwitterShare to FacebookShare to Pinterest
Labels: BCPoetry2018, community, review