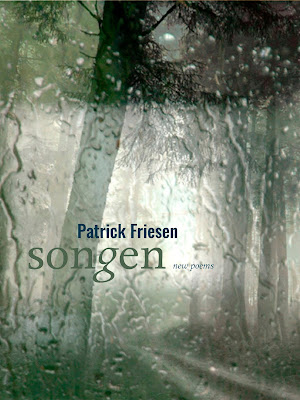 
Patrick Friesen, formerly of Winnipeg, now lives in Victoria. He writes poetry, essays, drama, song lyrics and text for dance and music; he has also co-translated several Danish poetry books with P. K. Brask. He has collaborated with various musicians, choreographers and dancers and has recorded CDs of text and improv music with Marilyn Lerner, Peggy Lee and Niko Friesen. He was short-listed for the Governor General’s Literary Award In Poetry in 1997, the Dorothy Livesay Poetry Prize in BC in 1998 and 2003, the Griffin Poetry Prize (a co-translation with Per Brask of Frayed Opus For Strings & Wind Instruments by Danish poet Ulrikka Gernes) in 2016, and the Fred Cogswell Award For Excellence in Poetry in 2016. He received the McNally Robinson Book of the Year Award in Manitoba in 1996 and the ReLit Award for poetry in 2012. In 2018 his play A Short History of Crazy Bone was staged by Theatre Projects Manitoba.

The poems in Songen move like swifts. They alight, but only briefly, before their smooth lifts, and hair-trigger turns take us places we had not expected to go. Each poem, one sentence long and separated by commas, tracks the movement of the mind. Occasionally using words and phrases from Middle English and Low German, the poems touch on musical influences, the changes in language over the centuries and on the dissolutions, dilemmas and inevitabilities of old age. A beautiful body of work, the poet at his finest.

Purchases: From the Mother Tongue Publishing website or at your local bookstore. $19.95.

Alighting, but only briefly.

Mother Tongue Publishing * About This Series * More Books, Please!
The copyrights of all poems included in the series remain with their authors, and are reprinted with the permission of the publishers.
Email ThisBlogThis!Share to TwitterShare to FacebookShare to Pinterest
Labels: BCPoetry2018, community, review