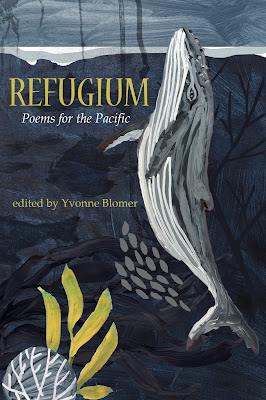 Luther Allen writes and designs buildings from Sumas Mountain, Washington. He facilitates SpeakEasy, a community poetry reading series in Bellingham and is co-editor of Noisy Water, an anthology of local poets. His collection of poems, The View from Lummi Island, can be found at http://othermindpress.wordpress.com.

Yvonne Blomer is Victoria’s poet laureate, 2015-2018. Her most recent collection is As If a Raven (Palimpsest Press, 2014). Her travel memoir Sugar Ride: Cycling from Hanoi to Kuala Lumpur was published with Palimpsest Press in 2017. Yvonne holds an MA with distinction from the University of East Anglia, UK.

While in the world of politics there are still climate change deniers, the poets watch the warming seas, the dying birds slicked in oil, the whales, the jellies, the sea otters and the octopus. They stand, as close to the shore as possible, watch the slow turning tide. In this collection of poems from the coast of B.C., California, Washington State, to Alaska and as far away as Auckland, New Zealand and as far back as early 19th century Japan these poems explore our connection to the Pacific, what we know and don’t know, how we’ve already changed the shore and the sea and what we fear losing. Poets in this anthology include John Barton, Brian Brett, Bruce Cockburn, Lorna Crozier, Brenda Hillman, Gary Geddes, Steven Heighton, Patrick Lane, Arleen Paré, Melanie Siebert, Anne Simpson, Rob Taylor, Patricia Young, Jan Zwicky and many more. In Refugium, editor Yvonne Blomer explores her deep concern with our sixth extinction and how stoic humans are continuing to wreak damage on the planet and her oceans.

Purchase from the Caitlin Press website or at your local bookstore. $22.95.

Standing as close to the shore as possible.


Caitlin Press * About This Series * More Books, Please!
The copyrights of all poems included in the series remain with their authors, and are reprinted with the permission of the publishers.
Email ThisBlogThis!Share to TwitterShare to FacebookShare to Pinterest
Labels: BCPoetry2018, community, review