one year anniversary bonanza - EVERYTHING MUST GO!!!

PLEASE NOTE: THIS SALE IS NOW OVER

i recently realised that it's been more than a year since i released my chapbook "splattered earth." i still have thirty or so copies kicking around my house and this seems to be as appropriate a time as any to get rid of them.

so, here's the plan: you will buy a number of copies (twenty-eight?). in return, i will offer you a mesmerizingly fantastic deal:

THRU PAYPAL (there's a link on the sidebar):

if you live in the US: ignore the "Canada only" part. i'll mail the thing to your door FOR THE SAME DAMN PRICE. and in Canadian funds. wow!

if you live in Canada: 2 for 1! i'll throw in an extra copy which you can give to your spouse, a friend, or that-guy-who-isn't-really-your-friend-but-who-you-still-have-to-give-a-christmas-gift-to-at-the-office-party-or-whenever-it-is-that-you-happen-to-run-into-him-during-the-holiday-season.

find me somewhere and i'll sell you a copy for a buck. i will also sell you seven copies for five dollars. i will NOT sell you any number of copies between two and six, nor will i sell you more than seven copies, unless in increments of seven (fourteen, twenty-one, ninety-eight, etc.). too much paperwork.

want to know a little more about the product before making such a significant investment? you can get more info here, and you can read a selection of poems from the chapbook here.

thanks for considering my meagre offer. as a reward for your attentiveness, here is a stunning batman fan film - if in a hurry, just fast forward to 3:55 and watch Robin try to climb over a railing.

PLEASE NOTE: THIS SALE IS NOW OVER
4 comments:
Email ThisBlogThis!Share to TwitterShare to FacebookShare to Pinterest
Labels: personal, splattered earth

how to start your nobel lecture...you know, if that ever comes up

They say the first sentence in any speech is always the hardest. Well, that one's behind me, anyway. But I have a feeling that the sentences to come - the third, the sixth, the tenth, and so on, up to the final line - will be just as hard, since I'm supposed to talk about poetry. I've said very little on the subject, next to nothing, in fact. And whenever I have said anything, I've always had the sneaking suspicion that I'm not very good at it. This is why my lecture will be rather short. All imperfection is easier to tolerate if served up in small doses.

- Wislawa Szymborska, from her Nobel Lecture upon winning the Nobel Prize for Literature, December 7th, 1996.

one cool word is a year old

and they are having a birthday party:

music, dancing, and poems (perhaps even a couple of mine) on the walls. all for a mere 10 dollars. go.

more info is available at www.onecoolword.com, though you can go there to learn more about the magazine.

also, the launch of their next issue will be May 12th at The Lamplighter. there may or may not be information about that forthcoming on their site.
No comments:
Email ThisBlogThis!Share to TwitterShare to FacebookShare to Pinterest
Labels: community 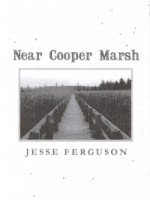 my review of Jesse Ferguson's chapbook Near Cooper Marsh has been posted on PoetryReviews.ca. you can read it here.

you can also read the whole chapbook online here. wowza.

p.s. OGOV #5 is up.
No comments:
Email ThisBlogThis!Share to TwitterShare to FacebookShare to Pinterest
Labels: OGOV, review

in watching the VT shooting coverage on the major US Networks - especially their fervent search for 'bad guys' above and beyond the shooter (the 'persons of interest,' the school officials, etc.) - i couldn't help but be reminded of the 'Sago Mine Disaster' of January 06, in response to which i wrote this column (poem?) for The Peak:

i must admit that when i wrote the column i wasn't quite sure where i was going with the thing, only that it all went together in a way that both satisfied and challenged me. now, returning to it and its overarching theme of collective deception via our desire for compelling narratives - the media's desire to turn human existence into theatre and our complicity in this - i feel like i understand what i wrote much better, and feel it that much more intensely - which is fairly devastating.

what happened at VT is unimaginable - even the idea of one death is enough to overwhelm our sensory and intellectual capacities - so we retreat emotionally in order to maintain ourselves, and watch the coverage as we would watch a video game. but this is life, it 'all we've got.' the reality is there are no 'bad guys' (or 'good guys'). the reality is as mundane as it is unimaginable, and that, i believe, is why we should grieve.
No comments:
Email ThisBlogThis!Share to TwitterShare to FacebookShare to Pinterest
Labels: non-poem, personal

"and then the whole thing degenerates into anagrams" - Andrea Actis

somewhat related: Marta is arriving in calgary from poland tonight. the adventure is officially over, and the ACCRA blog is going into hibernation, but with one last post.

not quite as related: i just wrote a poem about Don Cherry. my first poem in two months and it's about Don Cherry! does anyone know what to do with such a poem? personally, i'm stumped.

most importantly: hockey makes me sleepy. but it's a good sleepy.
2 comments:
Email ThisBlogThis!Share to TwitterShare to FacebookShare to Pinterest
Labels: HAP, personal

this is why you google your name, people

apparently a poem of mine, "foreigner," was published by the Sacramento Free Press's "Poems-For-All" Series in October of last year (lucky number 669).

they produce little booklets (like these) and distribute them around Sacremento. in other words, they are just about the coolest publisher out there.

so this is very neat. since mine came out six months ago, i'm not holding my breath on ever seeing a copy - but it's nice to know it happened.

oh, and if you are interested in reading "foreigner," you can do so here (it's near the bottom of the page). you can also read it in my chapbook, which you have a sudden, inexplicable urge to purchase.
3 comments:
Email ThisBlogThis!Share to TwitterShare to FacebookShare to Pinterest
Labels: community, personal, poem

it's here. happy easter.
No comments:
Email ThisBlogThis!Share to TwitterShare to FacebookShare to Pinterest
Labels: OGOV


and look here too!

Living art, like anything else, stays alive only by changing. The young artist must constantly examine the forms and aesthetic theories he has inherited; he must reject most of them, and he must search for new ones. Literature is all the more alive today because it is changing so rapidly. In fact it’s adjusting to the possibility that the printed page is no longer the chief disseminator of ideas, and that authors must find ways to bend the new technological media to artistic purposes. The rebels and experimenters who are forcing these changes are, of course, having to fight the same battles against the same kind of academic critics who attacked the literary revolutionaries of the last generation. In the beginnings, Joyce, Kafka, Rimbaud, Rilke, Pound, Brecht, even Eliot, were pooh-poohed or ignored as cheap and sensational, as mad or frivolous destroyers of sacred tradition. Now these men are the ancient great - and the young writers who find them inadequate are getting the same treatment. Of course, many literary movements in every generation turn out to be blind alleys, but no critic should think himself so perceptive he can always tell the passing fashion from the significant breakthrough. I don’t know exactly where the literary DEW [Distant Early Warning] line is this moment, but I’m sure it lies somewhere in the complicated world of today’s little-little magazines and small-press chapbooks.