The release of three of my promotional efforts for Best Canadian Poetry 2019 have conveniently coincided with the worst pandemic to hit our planet in over a century. So if your quarantine could be spiced up with a little "Rob Taylor yammering on aimlessly," do I have some links for you. 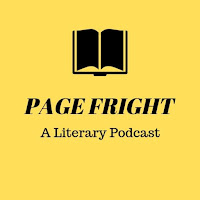 Following up on Page Fright's Best Canadian Poetry special episode, I sat down with the podcast's host, Andrew French, to discuss writing and editing (and grounds-keeping, and Cuban crabs, and former Canucks coaches, and...)

Page Fright is doing a wonderful job of providing an online platform for Vancouver poets, established and "up-and-coming" alike. Do check it out if you haven't yet.

A Different Rhythm: Editing Against the Clock, Literary Review of Canada

I wrote a fun little essay for LRC about editing Best Canadian Poetry 2019. I focused on all the silly ways I made space/time to read 2,133 poems on top of my normal hectic schedule. The essay features my favourite sentence I've ever written: "Joggers rubbernecked." 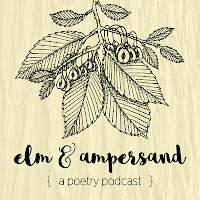 Recorded during my recent trip through the Maritimes, this podcast features Amanda Jernigan, Douglas Walbourne-Gough and me talking with hosts Rebecca Salazar and Jenna Lyn Albert about our experiences with Best Canadian Poetry 2019 and What the Poets Are Doing. Poetry Power Couples, and my tip for young writers re: poetry power couples, make an appearance, too.

Elm & Ampersand is the Maritimes' premiere poetry podcast, so be sure to subscribe and give some of their previous episodes a listen.
No comments:
Email ThisBlogThis!Share to TwitterShare to FacebookShare to Pinterest
Labels: BCP2019, personal, WTPAD

I managed to squeeze in a quick trip to the Maritimes just before the end of the world. We gathered in large rooms and shook hands and even hugged occasionally. It was truly a different world (early March, that is, not the Maritimes, which were basically Vancouver cosplaying as England?).

The trip started with a week-long residency at Saint Mary's University, which included a public reading celebrating both Best Canadian Poetry 2019 and What the Poets Are Doing. Absurdly, this meant my opening acts were art gallery curator Robin Metcalfe, BCP contributor Annick MacAskill, and WTPAD contributor Sue Goyette. And to top it off, the event was hosted by Amanda Jernigan. Needless to say, it was a hell of an honour to be a part of the show.


Amanda and I then went on a quick blitz of New Brunswick, a blitz which was slowed considerably by a busted gear shift on the outskirts of Petitcodiac, NB:


Avid readers of the blog will remember that, while racing between What the Poets Are Doing launches in BC, Amanda and I came very close to missing a ferry. (It turned out I couldn't tell Victoria highways apart.) Well, this time it was Amanda's turn (well, her truck's turn) to nearly cost us a reading.


But we were rescued, with minutes to spare, by Petitcodiac's librarian, the poet and essayist Danny Jacobs, who taped a "Back in 10 minutes" sign on the door and drove out to the highway off-ramp to rescue us. We made the reading, which was lovely, and I even managed to match my sweater with the official Petitcodiac Library reading chair! 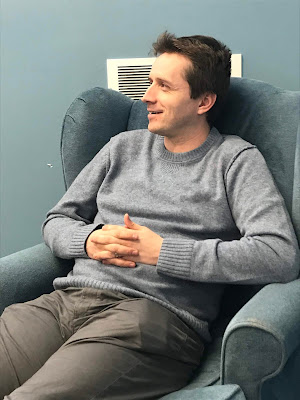 After the reading, Danny taped the sign back on the door (I valiantly assisted) and deposited us back on the highway to await the tow truck: 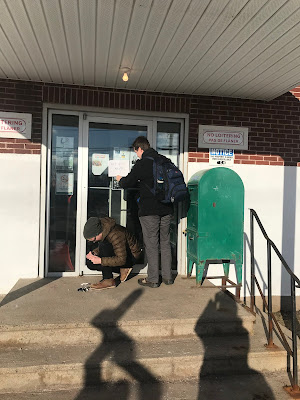 It arrived soon enough and after a bit of backtracking we secured another vehicle and were on our way to Fredericton, arriving only 13 hours after we left Halifax (which horrified everyone we told in New Brunswick, but honestly, for a BC boy, felt kind of average).

The next day we took part in the "Poetry Pile On," an event whose name I settled on because "Poetry Pile Up" felt too violent (and almost prescient, given how we lurched off the highway on the way there.)

Similar to the Halifax event, this one featured BCP 2019 and WTPAD contributors (Douglas Walbourne-Gough and Rebecca Salazar, and Amanda Jernigan, Sue Sinclair and Nick Thran, respectively).

The event was a hit, with a full room and excellent readings all around. Sue and Nick, in particular, gave some of the most interesting readings from WTPAD that I've heard to date, pulling out select quotes from a wide range of interviews that cohered to particular themes. The Fredericton event marked the last formal "launch" for both anthologies, and I couldn't think of a better group to wrap things up with.

After the reading, Amanda, Douglas, Rebecca and I skidded over to Jenna Lyn Albert's apartment to record an episode of her and Rebecca's Elm & Ampersand podcast. You can listen to that here.

Early the next morning I was on my flight home, utterly unaware that getting in a plane would come to seem reckless in just a week's time. It made me all the more aware of all the connections we're missing out on, as writers and readers, during this self-isolation. Here's hoping we make up for it with gusto once we're released back into the world.

And at least we can still read books! I came home with a bundle. It must be hard to live in Nova Scotia, surrounded by Gaspereau Press temptations every time you walk into a bookstore...

Here's a photo of some of the books I came home with, which I shared on Twitter with the hashtag #socialdistancereadinglist. Please consider joining in!


Much thanks to Amanda Jernigan and everyone at Saint Mary's for making the trip possible, and to everyone who helped fund, transport, feed and house me along the way. It was a joyful blur.

Without intending to, without even knowing it, he demonstrated with his life that his father had been right when he repeated until his dying day that there was no one with more common sense, no stonecutter more obstinate, no manager more lucid or dangerous, than a poet.

- Gabriel Garcia Marquez, from Love in a Time of Cholera