Some of my first new post-TOSOO poems have found there way out into the world!

I have two new poems ("Transatlantic" and "The Exterminator") in the Summer 2012 all-poetry issue of The Fiddlehead. The issue has a number of strong poems in it (you can read some sample excerpts here), including a sharp little set of five poems by Elena E. Johnson, who is one of our five Dead Poets readers on September 9th.

Also coming down the pipe, two poems from TOSOO ("The Wailing Machines" and "Rejection Slips") are going to be republished in Alive at the Centre: An Anthology of Poems from the Pacific Northwest. Put out by Portland State University's Ooligan Press, this anthology is going to be a big one, containing three mini-anthologies of poems from poets in Vancouver, Seattle and Portland (around 80 pages each, and 284 in total with all the paratexts thrown in). I haven't had much writing published in the U.S., so this should be fun.

The book, with its "Skeletor v. Tweetybird" cover, is already available for pre-order on Amazon, and my understanding is that it will be coming out in March of next year.

Thanks to The Fiddlehead and Ooligan Press for giving these poems of mine a chance!
1 comment:
Email ThisBlogThis!Share to TwitterShare to FacebookShare to Pinterest
Labels: personal, TOSOO

Tonight at 6 PM, I'm going to be on People's Coop Radio's Politics Re-Spun Radio, talking with Stephen Buckley about the founding (re-founding? reviving?) of High Altitude Poetry, and reading a few poems along the way. It was Stephen's classified ad in SFU's The Peak newspaper, looking for others who were interested in starting a poetry club, that finally dragged me out of the poetry closet way back in the early 2000s. It should be a fun trip down memory lane (for us, and maybe for others?).

You can listen in on 102.7 FM in Vancouver, or listen live over the web (click on the "Listen to our broadcast online" link on the left side).

No comments:
Email ThisBlogThis!Share to TwitterShare to FacebookShare to Pinterest
Labels: HAP, personal

The lineup for the next Dead Poets reading has been announced, and it reads like a Dead Poets All-Star Team (and the readers ain't too shabby, themselves!):

I don't think I need to make a big argument to convince you it will be an excellent afternoon of poetry. The details:

I hope to see you there. And please help spread the word!
No comments:
Email ThisBlogThis!Share to TwitterShare to FacebookShare to Pinterest
Labels: community, dead poets 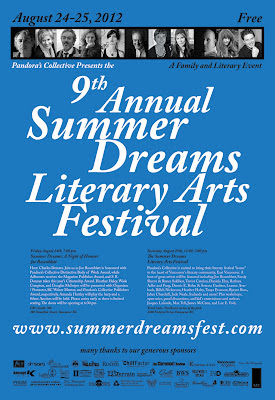 I'll be sitting at an info booth, bored and looking for people to come by and entertain me, for much of the afternoon. See you there?
No comments:
Email ThisBlogThis!Share to TwitterShare to FacebookShare to Pinterest
Labels: community

If you've followed this blog for any length of time, you'll know that I'm a big fan of the Association of Book Publishers of British Columbia's Poetry in Transit program, in which ad cards with poems on them are placed inside Vancouver buses and trains. You'll also know how gonzo-excited I was, then, to have a poem from The Other Side of Ourselves selected for the 2011-2012 PiT run! The poem in question:

All day the phone rings. Yes.
Thank you. Not today. Please.
The kettle quivers. Tonight’s chicken
puddles in its melt. Upstairs,
goldfish o the water’s surface.
A forecaster’s voice twirls
on the radio: Sun, sun, sun!
Outside, children buzz and loop
like model airplanes. Newspapers
crackle on the porch. A squirrel
scrambles up a bird feeder.
If someone doesn’t pick
those zucchinis soon, they’ll burst.

"Summer" went up just in time for Fall, in October 2011. At that point, I asked for people who saw my poem to send me a photo of it, in order to confirm it existed. The response I got was fantastic - even after the first couple months (and my confirmation that I'd seen it) the photos kept coming in.

Here then, in celebration of the year of "Summer", are the twenty-nine photos sent in to me since October. Thank you to everyone who sent something, especially Carolyn Churchland - she did a yeoman's job, snapping over 50% of the photos!

I loved receiving the pictures, especially the ones accompanied by a little story of how the poem was found or how the photo was taken. Each was a testament to how this program can brighten a rider/reader's day.

My poem will still be up around Vancouver for a couple weeks, after which it will be moved on to BC Transit buses throughout the province, where it will stay for a year. So folks living in the rest of the province: keep your eyes peeled, and if you spot it know that I'd love to add to my collection.

Here, then, are the big twenty-nine (complete with photographers' notes) in all their redundant glory. Thanks again, everyone!

The hard part for me [when writing a poem] is to find the poem—a poem that matters. To find what the poem knows that’s special. I may think of writing about the same thing that everyone does, but I really like to write a poem that hasn’t been written. And I don’t mean its shape. I want to experience or discover ways of feeling that are fresh. I love it when I have perceived something fresh about being human and being happy.

Ezra Pound said “make it new.” The great tragedy of that saying is he left out the essential word. It should be make it importantly new. So much of the time people are just aiming for novelty, surprise. I like to think that I’ve understood, that I’ve learned about something that matters—what the world should be, what life should be.

- Jack Gilbert, in his 2005 Paris Review interview. You can read the whole thing here.
No comments:
Email ThisBlogThis!Share to TwitterShare to FacebookShare to Pinterest
Labels: Jack Gilbert, quote

something that's not correct or entertaining or clever

I think serious poems should make something happen that’s not correct or entertaining or clever. I want something that matters to my heart, and I don’t mean “Linda left me.” I don’t want that. I’ll write that poem, but that’s not what I’m talking about. I’m talking about being in danger—as we all are—of dying. How can you spend your life on games or intricately accomplished things? And politics? Politics is fine. There’s a place to care for the injustice of the world, but that’s not what the poem is about. The poem is about the heart. Not the heart as in “I’m in love” or “my girl cheated on me”—I mean the conscious heart, the fact that we are the only things in the entire universe that know true consciousness. We’re the only things—leaving religion out of it—we’re the only things in the world that know spring is coming.

the great oak has fallen

As I'm sure most of you are aware, John Atta Mills, the President of Ghana, died suddenly last week.

Over at One Ghana, One Voice we've opened a call for poems memorializing the late president. Already over a dozen have flowed in, including poems by Prince Mensah and Darko Antwi, with more arriving daily.

I've been most touched by the personal notes that have begun arriving in our email inbox thanking us for posting these poems. Many readers (often Ghanaian expats) have found that reading the poems on the site has helped them feel connected with others who are just as shocked and grief-struck as themselves.

Prince Mensah puts it best when he says, in our press release about the submission call, that “across Ghanaian cultures, when a great man goes to the village, there are several events that commemorate that man's life. There are dirges, dances, discussions and dedications. Out of all the literary genres, poetry tends to be the kind that symbolizes, and captures, the brevity of our sojourn on earth, together with an appropriate summary of our deeds. The various poems on One Ghana, One Voice evoke the essence of this patriot worthy of emulation.”

We'll be publishing poems daily on the main page of the site until we run out. It would be wonderful to have some international contributions, if anyone feels so moved. There is no length limit (a haiku would make the cut), and the poems don't have to be hyper-specific to this particular situation, so there's space for you even if you don't feel overly qualified for tackling the subject.

If you know of anyone who might be interested in this, please do help spread the word!
No comments:
Email ThisBlogThis!Share to TwitterShare to FacebookShare to Pinterest
Labels: OGOV, personal
Newer Posts Older Posts Home
Subscribe to: Posts (Atom)