A Woven Basket with Others: An Interview with Isabella Wang

The following interview is part four of a seven-part series of conversations with BC poets which I released between January and April 2022. All eight interviews were originally posted at ReadLocalBC.ca. This was the third year of my collaboration with Read Local BC (you can read the 2019 interviews here, the 2020 interviews here, and the 2021 interviews here).

Ghazal for Heirloom Family Recipes - Isabella Wang
My grandmother taught me five different ways to deflesh a bitter gourd,
how to scrape off the residue left from seeds so it would taste less bitter.
Recipe for old-fashioned liquor: Replace the sugar cube with elderberries.
In an ice-filled mixing glass, stir bourbon, St. Germain and bitters.
The best coffee was served to me by a young woman at the Ethiopian café—
it was sweet on its own, and permeated all the necessary tinges of bitterness.
When you leave water in a cup for too long, it evaporates. Can’t say
the same about honey, but it’s beginning to clump. Tea leaves turn bitter.
My grandfather died while eating crab and red wine—heart attack.
This is a spell we are currently under, but I promise it won’t stay bitter. 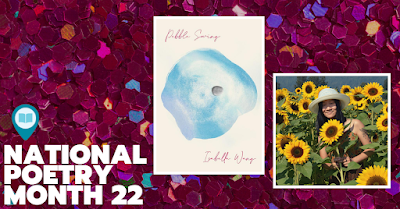 A Gift of Mystery and Many Hands: An Interview with shauna paull

The following interview is part three of a seven-part series of conversations with BC poets which I released between January and April 2022. All eight interviews were originally posted at ReadLocalBC.ca. This was the third year of my collaboration with Read Local BC (you can read the 2019 interviews here, the 2020 interviews here, and the 2021 interviews here).

as you come to dust - shauna paull
let its settling be rare
let it carry the great, low hum of mountain
tune of sap      notes of summer
leaves under high tide pull, under low
that hush before the opening of wings
let it caress, as hands have done, the bare feet of a fraught child
an adventuring child
let its sparks of want, want     burn softly away
let its final quiet be a listening, solace for difficult necessary voices
let its listening protect the ones who remain
let it rest, lift, soften the edges of wind, lift again
and be carried 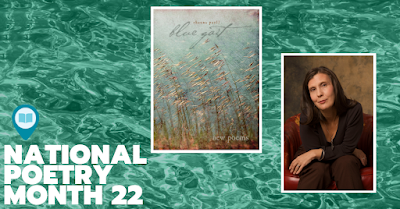 ---
Rob Taylor: So many of the poems in blue gait feel timeless: they deal with abstract, existential questions that we as a species have been asking of ourselves since time immemorial. But another stream of poems in the book is tightly bound to the political world of the here and now, centred around particular injustices (such as the confirmation of the 215 children buried at Kamloops Indian Residential School or the ongoing actions at the Unist’ot’en Camp). In these poems you speak very specifically and politically.
These two “modes” seem to mirror your larger life, in which you work as both writer and activist. Could you talk about these two “modes” in your writing: the abstract/eternal and the political/immediate? Do you think of them as distinct from one another, or as part of an indivisible whole?
shauna paull: Thank you for this question, Rob. I think I mostly resist separations between art and world. In the presence of my community work, which was political as well, my most fervent hope was to create access to abundance for the highest number of people. It’s natural then that the work emerges from ontological concerns and enlarges to encompass the concerns of those whose lives are marked by xenophobia of one sort or another. I am aware that some of the poems that address what is present in the “here and now” are doing so because the stories of alterity that open in them are longstanding.
I think song is the one thing that can cross just about every barrier — what moves a space of air cannot be contained by any regulatory or political body, or set of convictions. For me, these poems are a small attempt at creating song-space for witness — my own. This space is limited in various ways, but my hope is to honour what remains alive in the communities I am engaged with and hope to support.
The root values of well-being, autonomy, and dignity for all, will likely always be central to my thinking and making. It’s possible that a practice of paying attention with one’s heart is present in the work, too. Nobody is really safe until we are all safe. At this point in time, I carry an awareness that witness will always be needed, but also celebration and beauty and kindness, all of which are under-sung in the dominant myths of our country and in capitalism. Simplicity and relational attentiveness take time and care and it seems to me, from almost every direction, these benefit humanity.
RT: In blue gait you make space not only for the historical and ongoing injustices experienced by Indigenous peoples in Canada, but also draw upon the words of a number of Indigenous poets, from Joanne Arnott, to Gregory Scofield, to Leanne Betasamosake Simpson. Could you speak to the importance of Indigenous history and voices in your life, and in this book in particular?
sp: My undergrad was focused on post-colonial literatures so I am aware now that although I had to read Eurocentric canonical texts alongside, I was able as a young person to access world literatures, literatures of liberation and resistance, as well as Indigenous literatures from across the globe. I am grateful to have been opened in my early learning to stories that unsettled individualism as a value and, again and again, enlivened ideas of communities working together for larger substantive change.
I think current Indigenous writers share with us a world view that has been responsible for the stewardship of lands, and particular connections with the land (and each other) that are essential for all of us to understand. Those stories are also longstanding. Across time, and especially now, they have been great gifts toward my thinking and making.
My community work has for years located me near Indigenous leaders and Elders as well. I have had the great gift of being invited into ceremony, for which I am grateful, and there it’s impossible not to witness the wisdoms of the people of these lands. The necessary work of reconciliation and decolonization will be long, but I locate this as the most important conversation of our time. In writing this book, I was accompanied by all these gifts. My hope is that the respect I have for Indigenous communities that work and celebrate, create and re-create, in this ongoing genocide, is present in the text.
RT: The arrival of your “starlit granddaughter,” Shai, seems of vital importance to blue gait. When you write about Shai the abstract questions of human existence and the grounded realities of political injustice seem to come more pointedly together. Could you talk a little about Shai’s arrival in your life? Did it cause you to think about your writing in a new way?
sp: It is difficult for me to speak about my daughters or my granddaughter without becoming immediately corny. Daughters are unaccountable beauty and mystery. To be near that for all these years still leaves me mostly speechless. Much of my community work was rooted in modelling for my daughters a woman’s responsibility toward well-being in our world. Shai’s arrival was no different — although she is a new iteration of my mother, another wildly extroverted creative. And that was an added gift.
Some of these poems were composed when I was at home during COVID lockdown, and when my daughters were younger I worked mostly from home as well. So, there was a kind of circling around the wonder that a new life represents, whatever the circumstances of the world. A balancing and re-invigorating of the importance of nurturing responses to the devastations of both history and the present moment. 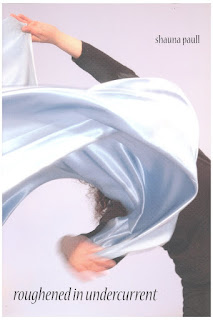 A Congenial Barrier: An Interview with W.M. Herring

The following interview is part two of a seven-part series of conversations with BC poets which I released between January and April 2022. All eight interviews were originally posted at ReadLocalBC.ca. This was the third year of my collaboration with Read Local BC (you can read the 2019 interviews here, the 2020 interviews here, and the 2021 interviews here).

Late November, -10 C - W.M. Herring
I forgot to tell you, to say,
(that time you went for so long
came back somewhat changed)
forgot to say:
The barred owl was there
in the paddock at four o’clock
on a stump, hunting mice
catching distilled, chilled amber air.
He lifted off, banked aside the barn,
settled in an aspen by the fence.
Crows massed from nowhere,
everywhere, scolded, circled
as though something
was dead or should be.
The owl slid off the branch
almost liquid
slipped under the bare willow
the swaying heads of grass.
The crows flew east, shed
gloaming from their tails.
I rushed up the hill, up home:
I thought you might be there.

Reprinted with permission from
A Sure Connection
(Now or Never, 2021)
--- 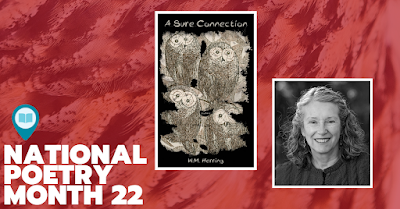