the 2021 roll of nickels year in review

2021 was another busy pandemic year here at Roll of Nickels. I continued my pandemic-inspired efforts to increase content on the blog, posting ten new interviews (see below!), three new poem/poet profiles (Diane Tucker, Tolu Oloruntoba and Molly Cross-Blanchard), and fifty-five new quotes on writing.
2021 was also the year I launched a book during a pandemic! What fun! Strangers came out in April, and was formally launched in May, with an online event featuring Sadiqa de Meijer and Sue Sinclair, and hosted by my editor Luke Hathaway. You can view that here. Unable to tour the book, this summer I took my tour local, with readings around Vancouver (even those were fraught - one was canceled by a record-shattering "heat dome," another was rained our and had to be moved into the overhang area of an elementary school playground... normal stuff!). I loved getting to hear new poems from fellow pandemic-launching poets - eleven total guest readers over the course of the series. Readings at the Vancouver Writers Fest, Word Vancouver, and the Real Vancouver Writers Series kept me busy all fall, and helped me feel like it might really be reaching readers out there in the world! Reviews of the book and also interviews about the book kept me afloat despite the lack of in-person connections. Thank you to everyone who spent some time with Strangers in 2021 - it meant a great deal to me. 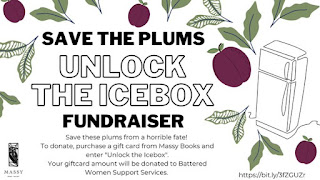 My non-book poetry publishing was all haiku and very short poems, which appeared in a variety of magazines (including a few online). 2021 was perhaps most notable as the year my internet silliness spilled over into the real world: after 25 rounds of it online, I brought my Emoji Book Titles into an actual pub for the Emoji Lit Pub Quiz at the Vancouver Writers' Festival. Even more bizarrely, after a couple years of spamming the internet with William Carlos Williams "Plum Poem" memes, Juliane Okot Bitek called my bluff and gave me a $50 gift certificate to Massy Books to stop making them. Calamity ensued. In the end, my right to make plum memes was restored, and $735 was raised for Battered Women Support Services. I know, right? A very normal year all around.
But on to the main attraction. My 2021 interviews:

April 2021: Rain That Washes Away The Pretty Surface Of Things: An Interview with Jen Sookfong Lee


"Vancouver renews itself constantly, with new condo towers and restaurants and migrations, but the history constantly bubbles up to the surface, impacting the contemporary. We are a port city, where vice has always been and will continue to be an industry all on its own. We have always been a place where people come to be at the end of the world, when the rest of it has become too much. And no matter how hard developers build on old neighbourhoods, the descendants of those razed communities are still alive, still remembering. All of this is a structure that my poems, and my prose, mimic—circularity, past timelines imposing on the current day, rain that washes away the pretty surface of things." - Jen Sookfong Lee


April 2021: I'm Not Supposed to Be Here: An Interview with Junie Désil


"That moment of recognition is beautiful when you read something that speaks to you and your experiences. Something that understands the deepest, most secret parts. That is what I love the most about writing and reading, and what I look for." - Junie Desil

April 2021: One Foot In, One Foot Out: An Interview with Patrick Friesen

"In my life I arrive at times where I am silent, need to be silent, and sometimes I think this is the way it should be from then on. I have great admiration for those mystics who achieved silence. But how does that happen? Would I run out of words? Get tired of putting them on the page? Would the words feel so empty finally that silence already existed, only I had to recognize it?" - Patrick Friesen


April 2021: A Third Animal Emerges: An Interview with Lillian Boraks-Nemetz

"I come from a broken language. I wrote in Polish as a little girl, then I was told when we came here that my past did not exist, only my English future. When I saw a Polish poem translated into English, I saw the possibility of my own writing." - Lillian Boraks-Nemetz

April 2021: Achieving An Equilibrium: An Interview with Cicely Belle Blain

"I definitely had the potential whiteness of the audience in mind when writing, which is one thing I regret about the book. It is only very recently as people start to question and critique diversity and inclusion consulting or anti-racism training, that I realised a lot of anti-racism education is directed towards white people. We simplify big concepts, or sometimes even exploit our own trauma, to educate white people” - Cicely Belle Blain


April 2021: Wherever We Are Going, We Are Going Together: An Interview with Terence Young

"The strange thing about death is that we seem to fear it more when we are farthest from it, when we are young. Existential dread is a young person’s malady, and our fear subsides, moderates as we grow older. More and more, I feel the way I do when I board a plane. I look around at all the passengers and tell myself that wherever we are going, we are going together. The universality of death makes it easier to accept somehow.   " - Terence Young


April 2021: Gesturing Out To Different Horizons: An Interview with Dallas Hunt

"There are so many amazing Indigenous poets at this particular moment. That said, I think you’re right in saying that there is a long lineage of Indigenous writers who have paved the way for many of us. Also, there is this term that emerges in relation to Indigenous writing—”renaissance”—that I think is deeply problematic and doesn’t gesture to the peoples who have been writing for decades (Linda Hogan, Chrystos, Eden Robinson, among others)." - Dallas Hunt


April 2021: That Prism of Perspectives: An Interview with Barbara Nickel

"In my previous books, not wanting to be misunderstood or boxed in, I think I’ve tried to hide my thirst for the spirit inside music or my Mennonite family history or even in the sometimes convenient obscurity of language. In these poems—even visually there’s a lot of bare space—there’s really no place to hide..." - Barbara Nickel


April 2021: Speaking to my kohkum Through Dreams: An Interview with Selina Boan

"Poetry doesn’t always have to make “sense” in order for it to hold emotional weight or feeling. The same can be said for learning a new language—though you don’t necessarily know yet what exactly is being said, you can feel and know the language in your body. That has been my experience with nêhiyawêwin. " - Selina Boan


July 2021: Salvaging My Old Dreams: An Interview with Matsuki Masutani

"I was unaware of my poems being minimalist until others pointed it out. It seems that I want to get out of the creative mode as soon as I am in it because of my shyness or self-consciousness." - Matsuki Masutani


I've got a lot to look forward to in the new year, including three essays which should all be coming out in January (in Event, Canadian Notes & Queries, and Resonance: Essays on the Craft and Life of Writing). On the blog, look for extended versions of interviews with Steven Heighton, Sadiqa de Meijer and Shaun Robinson (from which excerpts were recently published, respectively, in The Walrus, Arc and CV2), and, of course, a bunch of other surprises!
Happy New Year, all!
No comments:
Email ThisBlogThis!Share to TwitterShare to FacebookShare to Pinterest
Labels: personal, year in review
Newer Posts Older Posts Home
Subscribe to: Posts (Atom)