Earlier this month, our family went on a little road trip through BC and Alberta. One of my favourite parts (behind only the water slides, mini-golf and dinosaur bones) was visiting book stores.
If you find yourself making a similar trip, here are three you shouldn't miss: 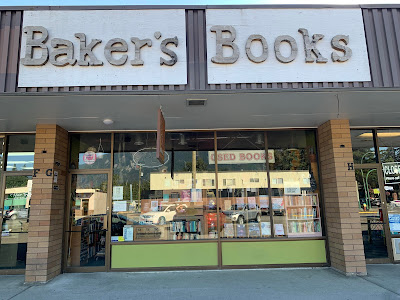 First up is Baker's Books in Hope, a used bookstore where every book is $2! They have a small but mighty poetry section, and a strong selection of rare poetry books at the back (they cost a bit more). Always worth a stop at the beginning of a road trip. 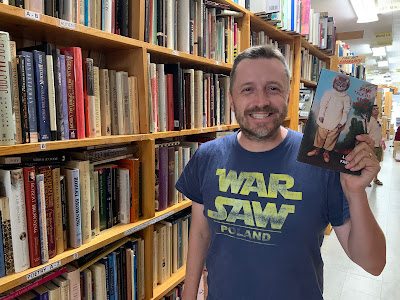 Another bookstore I'm always sure to visit is The Book Shop in Penticton. With over 5,000 square feet of floor space, it's one of Canada's largest. This time I counted 28 shelves of poetry, ten of which were Canadian (including Laura Farina's Some Talk of Being Human, photographed here). 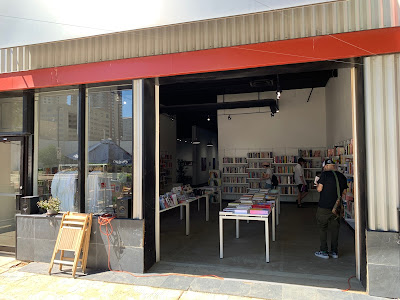 My tour of Alberta bookstores was truncated by our skirting around Calgary to avoid Stampede madness (and to spend more time hunting dinosaur bones), but I made sure we popped in to Glass Bookshop in Edmonton. Founded by poets Jason Purcell and Matthew Stepanic, it's an absolute heaven for poetry fans. 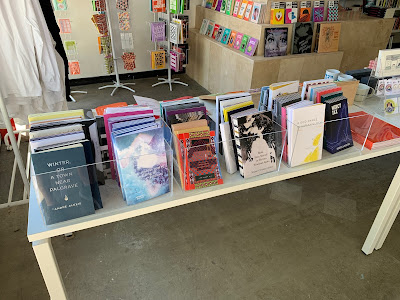 Right at the front entrance you're greeted by this fantastic array of (mostly poetry) chapbooks. 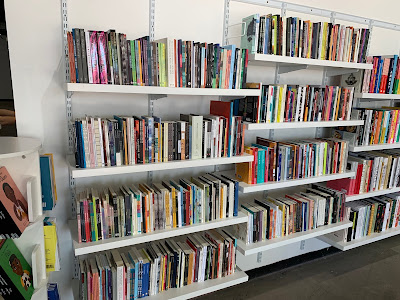 And inside - boom! - eight shelves of brand new poetry, largely from Canada and the US. It doesn't get any better than this.
While I didn't get photos in other places, stores like the Wee Book Inn and Audrey's in Edmonton and Three Hills Books in, strangely enough, Three Hills, were also a pleasure to visit. 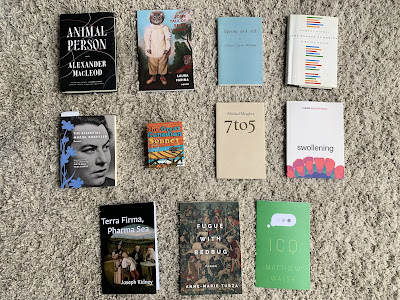 Here's the full list of the books I picked up on the trip, along with the bookstores in which I acquired them:

A mere 12 books! My restraint grows with every year (or, at least, the space in our apartment diminishes). You can check out past trip book hauls here: 2011, 2016, 2017, 2019. God and COVID willing, I hope to be making many more such reports in the coming years!
1 comment:
Email ThisBlogThis!Share to TwitterShare to FacebookShare to Pinterest
Labels: personal

What Trickles Down the Line: An Interview with Ellie Sawatzky

The following interview is part one of a seven-part series of conversations with BC poets which I released between January and April 2022. All eight interviews were originally posted at ReadLocalBC.ca. This was the third year of my collaboration with Read Local BC (you can read the 2019 interviews here, the 2020 interviews here, and the 2021 interviews here).

Sun Valley Lodge - Ellie Sawatzky
Somewhere in my mind, you’ve become
inseparable from the old boats, the plastic
Adirondack chairs. Listen, I saw plastic
Adirondack chairs long before I ever
saw you. I also saw red cars, fireweed,
deer in the road. I saw ukuleles and Amélie.
I rolled my own cigarettes, smoked them
alone, I crocheted poems to keep warm
at night before you, so step back, love,
this is my line of pine trees. This is my
soft light falling fast behind the lake.

Reprinted with permission from
None of This Belongs To Me
(Nightwood Editions, 2021)
--- 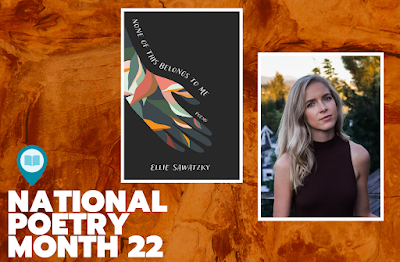 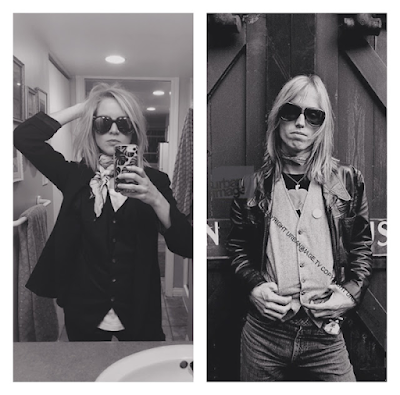 ---
Ellie Sawatzky is a writer from Kenora, ON. A finalist for the 2019 Bronwen Wallace Award for Emerging Writers and the recipient of CV2’s 2017 Foster Poetry Prize, her work has been published widely in literary journals such as Grain, The Fiddlehead, PRISM International, The Matador Review, The Puritan and Room. She works as an editor for FriesenPress, and is the curator of the Instagram account IMPROMPTU, a hub for writing prompts and literary inspiration. She holds an MFA in Creative Writing from UBC and lives in Vancouver.
No comments:
Email ThisBlogThis!Share to TwitterShare to FacebookShare to Pinterest
Labels: BCPoetry2022, Ellie Sawatzky, interview, Nightwood Editions
Newer Posts Older Posts Home
Subscribe to: Posts (Atom)