My old pal Colin Stewart is launching his book A Question of Extremes at Cafe Montmartre (4362 Main St) on Wednesday, July 2nd, starting at 8:30pm. "Two Mile Road" by Stephen Locke will be launched the same evening. More info can be found here. Check it out!
2 comments:
Email ThisBlogThis!Share to TwitterShare to FacebookShare to Pinterest
Labels: community

As I mentioned in my last post, late last year I stepped back from any sort of leadership role (or role in general, really) with High Altitude Poetry, which I started up with when it was reformed in 2002 (it was originally founded in 1989 by Stephen Buckley, and then reestablished when he returned to campus in '02).

It took until seeing the latest issue, with its kind dedication towards our 2002 - 2007 "generation", to realise that, yeah, it's been a long time, and quite a bit of work.

So I went to the bookshelf and pulled out my archive of HAP issues - something I hadn't yet done. Considering that we've published almost 10,000 copies since the zine started in 2004, it's quite possible that others out there have complete sets (23 issues and counting, plus a tribute issue for Stephen) - but at this point the only collections I know of are mine and the two at the libaries at SFU and the National Library in Ottawa.

So it was neat to finally lay them out and take a look at them all (and a picture). 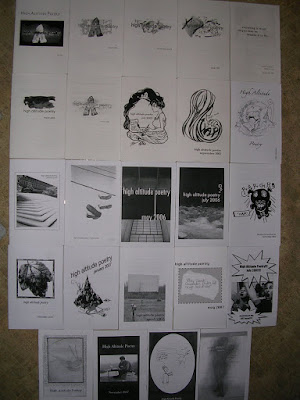 Upon viewing the arrangement, four thoughts immediately came to me:

1. It's obvious when SFU upgraded its paper stock.
2. Same for when HAP moved from in-house cover art to submitted work.
3. Perhaps less obvious for most, but painfully obvious for me, are the issues for which I was left in charge of the cover - think "ugly", "Papyrus", and "Typewriter".
4. My living room has terrible lighting.

p.s. Bonus point if you can find my toe in the picture.
3 comments:
Email ThisBlogThis!Share to TwitterShare to FacebookShare to Pinterest
Labels: community, HAP, personal

The March 2008 issue of High Altitude Poetry is finally online, and can be read here.

I knew the March issue featured my poem "Hasting and Carrall" (which I posted here a while ago), but I hadn't actually seen the issue yet.

I was quite touched to find that it had been dedicated to myself and Colin Stewart: a thank you to "the second generation of High Altitude Poetry from the third." It's hard to claim much of the credit, as Colin and I were only a small part of a large group of "second generation" HAPers - but considering how thin the institutional memory is in most student organizations, that one generation knows any of the members of the last is remarkable (and a testament to the firm foundations laid by all our volunteers).

In case you aren't in the loop on this, I stopped taking a lead roll in HAP when Marta and I left for Ghana in '06. When we returned I reclaimed the helm somewhat for the summer of '07, then, after a brief transitional period, left it to the "third generation" to keep SFU's poetry club and zine going - and they've been doing a helluva job.

Thanks, HAP - keep it up!
No comments:
Email ThisBlogThis!Share to TwitterShare to FacebookShare to Pinterest
Labels: community, HAP

If you haven't read qarrtsiluni, an online litblog/magazine, you're missing out.

The quality of the stuff they publish is far above most blog/magazines, and they publish more than once a year, unlike those folks over at forget.

They publish themed "issues" every two months. Photos, short stories and poems (often featuring audio recordings - something I'd love to get going at One Ghana, One Voice) are posted sporadically throughout that period.

May and June 2008 have the theme of "Water" and the last few days have brought the posting of these two great poems.

Check it out!
No comments:
Email ThisBlogThis!Share to TwitterShare to FacebookShare to Pinterest
Labels: community

A new issue of Red Fez is out - and I had nothing to do with it! We had a guest editor come in for this issue: near-constant Red Fez contributor Jeffery Van den engh. You can check it out here.
No comments:
Email ThisBlogThis!Share to TwitterShare to FacebookShare to Pinterest
Labels: community
Newer Posts Older Posts Home
Subscribe to: Posts (Atom)