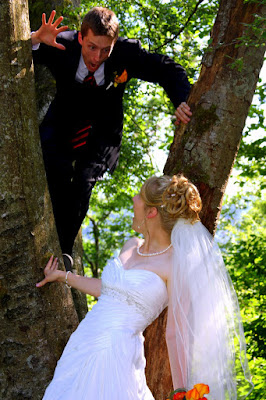 It only took 8.5 years, but I finally got her to sign on the dotted line! As of Saturday, Marta has a new last name and I have a very, very sweat-stained suit.

A week of visiting with family and friends is ahead of us, then a four-day honeymoon on Gabriola Island, then...just maybe...normalcy? We'll see.

p.s. If yer interested in baby pictures (of us...now don't go starting any rumours) and such, I've posted our wedding slide show on our wedding blog.
No comments:
Email ThisBlogThis!Share to TwitterShare to FacebookShare to Pinterest
Labels: personal

building a house that is never finished

It's the CanCon version of the Bukowski bungalow... though it doesn't look like we've gotten together much of a movement to save it yet. This one matters a helluvalot more to me than the Bukowski one:

"The house where Al Purdy lived is on the block", Globe and Mail, July 11th

p.s. The effort to save Bukowski's place was a success, as L.A. City Council in February declared it a historic landmark.
No comments:
Email ThisBlogThis!Share to TwitterShare to FacebookShare to Pinterest
Labels: al purdy a-frame, community

I don't know what made me think sticking the word "email" at the beginning of my email address was a good idea. It's tough to get a unique address with a name like Rob Taylor, and it made me a little desperate, I suppose.

Often enough people assume the "email" past is just a bizarrely placed note to them that what follows is my email address, and not part of the address itself. Because of this, the poor guy who owns "robtaylor AT gmail DOT com" has gotten a number of my emails over the last couple years, and a while ago got fed up and stopped forwarding them on to me.

It's especially been a headache during wedding preparations, with a few missed RSVPs and other similar problems.

The last straw, though, was the call yesterday from the editors of the Rocksalt Anthology wondering why I hadn't responded to a series of emails from them.

I'm really thrilled to be included in the anthology, and I can't believe I almost missed out on it because of my idiotic email address. So "emailrobtaylor(at)gmail.com" is dead. Long live:

i feel fine. i feel happy! 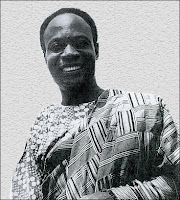 No, the blog's not dead - I'm just getting married in eight days. Sorry for the paucity of posts lately.

Only One Ghana, One Voice is staying green during this drought. Over there we are nearing the end of week one of the "Kwame Nkrumah Series", which features our first video post.

It's our second theme month after January's "Keta Series", which I rambled on about in a previous post.