I've had a subscription to POETRY for the last year, and generally speaking I've been underwhelmed by the content. Usually, there's one or two good poems and then something random and underwhelming by or about a "big name" poet, just so that they can slap that name on the cover (like September's issue featuring doodles by Philip Larkin).

The October issue, though, has been a nice surprise. Yeah, it has another non-poetry "big name" addition (letters between Robert Lowell and Elizabeth Bishop), but this one is at least interesting. And the poems are pretty damn good too, especially those by Sarah Lindsay (like this and this) and the poem "A Good Fish" by Derek Sheffield, which is bloody fantastic.

So pick up a copy while it's still on the shelf, or read almost all of it online here.
No comments:
Email ThisBlogThis!Share to TwitterShare to FacebookShare to Pinterest
Labels: review

2. Kae Sun - Ghanaian-Canadian musician and poet. Great stuff. Also, his MySpace and One Ghana, One Voice pages. Oh, and here:

3. Ladner and Robertson on the DTES disappearing - as reported by Frances Bula. Three elections at once... god, it was a wet dream. Two is still pretty good, even if they don't drop pucks at hockey games in our municipal race.
No comments:
Email ThisBlogThis!Share to TwitterShare to FacebookShare to Pinterest
Labels: community

I just came across this site, run by an English student at SFU: Every Day Fiction.

As the title suggests, they publish a new short story every day - and I thought One Ghana, One Voice's weekly schedule was a strain...

And on top of that, these overachievers pay their writers! How's a guy to keep up with that?
2 comments:
Email ThisBlogThis!Share to TwitterShare to FacebookShare to Pinterest
Labels: community

I just got my (surprise) contributor's copy of Feathertale Review #3. Put out by the folks who run feathertale.com, it's a swank print mag chocked full o' satire and such. Each issue they publish a few pieces that originally appeared on the website, and this time they picked my poem "Haiku 1-4". Thanks, Feathertale!

Anyway, it's got some top-notch content, including a non-fiction piece by Richard Taylor and this, from "I Shot a Stray Cat" by Greg Boose:

Finally the cat and I made love
notes and we read them out loud.
She stood to recite the details of the orifices
that could be found in her little cat heart.

It's a great read, so buy a copy in one of these stores! Or online!
No comments:
Email ThisBlogThis!Share to TwitterShare to FacebookShare to Pinterest
Labels: community, personal

I always thought it would be neat to own "robtaylor.com". Unfortunately, so did this guy. Having grown tired (and increasingly guilty) of wishing for the sudden demise of a Connecticut pop musician, I turned to the old middle name strategy.

As motivation to go check out the site, I've posted a never-before-online poem over there, entitled Viciously in our throats. It's from my new chapbook, which is next on my list and should be coming out soon.

With silaron no longer serving as both my formal and informal online poetry presence, tho, I plan on increasing the rate of awkward pant-related commentary on this blog - so I'm thinking it will be a big improvement overall.
No comments:
Email ThisBlogThis!Share to TwitterShare to FacebookShare to Pinterest
Labels: personal

...at One Ghana, One Voice. Ananse (Akan for "spider") is one of the central characters in West African storytelling. Originating with the Ashanti people of Ghana, Ananse stories (Anansesem) have since spread throughout Africa and the diaspora.

We're focusing all of October on poems related to the eight-legged trickster. Check it out here.
No comments:
Email ThisBlogThis!Share to TwitterShare to FacebookShare to Pinterest
Labels: OGOV

the imprint of the unsayable

For some poets, I think, the poem starts with an image; but I usually don't feel I've got the image until I hear the music. Anyway, I'm a music junky - and sometimes what I find most musically satisfying turns out to be in emotional bad taste: "dim lands of peace," etc. I'm instinctively drawn to the idea that poetry is memorable speech. But in - rightly, I think - depriving ourselves of certain rhetorical stances, what we are able to make is more like memorable image or memorable though. (That last not in some abstract sense, buit in a sense fully compatible with William Carlos Williams's dictum). So, the upshot is that I'm much less confident I could actually say what poetry is. But also, partly as a result of a lot of experience editing other people's work, I find I don't really care anymore. What's important, and moving, is the imprint of the unsayable on what is said - and there's enormous range in the ways the unsayable manifests itself.

- Jan Zwicky, from Where the Words Come From: Canadian Poets in Conversation, Ed. Tim Bowling, 2002. 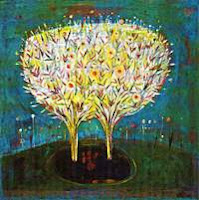 The latest issue of the Antigonish Review just came out, featuring two poems I wrote while living in Ghana: "The Slave Castle of Elmina" and "What they are doing". Thanks, Antigonish Review!

The issue contains a whack of good stuff, especially a poem by Daniel Newman that starts with the title "You and I are the lucky ones (after Richard Dawkins)" and only gets better from there.

As far as Ghana poems go, I'm very near finished my chapbook of poems from Ghana, which includes the poems from the Antigonish Review. Check back soon!
2 comments:
Email ThisBlogThis!Share to TwitterShare to FacebookShare to Pinterest
Labels: child of saturday, community, personal

they live among us...

Don't say you weren't warned: Poet Laureate Map of Canada. It seems they are most commonly sighted in Ontario.
No comments:
Email ThisBlogThis!Share to TwitterShare to FacebookShare to Pinterest
Labels: community
Newer Posts Older Posts Home
Subscribe to: Posts (Atom)