tricked out with some edifying thoughts and feelings

Brian Bartlett: Denise Levertov says on the back of your book of essays, Body Music, that your poems matter to her "because, more consistently than those of anyone else whose work I know, they manifest a full awareness of the poem as a form of musical score." What do you think Levertov meant by that?

Dennis Lee: ... Ok, I think Denise was talking about rhythm... We experience rhythm directly with our bodies, but now you're tying to convey it by means of words on a flat piece of paper... I think Denise recognized this preoccupation with how a poem enacts, in its rhythmic moves, a whole way of our being in the world. In fact if you're lucky, it enacts a way the world goes about being itself. Or at least tries too.

BB: But how does poetry "enact," rather than just reflect, those ways of "being in the world"? Or the ways the world has of "going about being itself"?

DL: For me, it means you don't just give a description of objects and events, tricked out with some edifying thoughts and feelings. It's a whole different gig. I sense the world as a polyrhythmic process - a dance of simultaneous energies. And the poem has to mime that process - not by describing it, but by reenacting its simultaneous sprawl and twiddle and ache. Right in the way it moves, its rhythmic trek. So when Denise spoke of the poem as a musical score, I think she was pointing to this dimension of scribbling. How the way you orchestrate words on the page manifests your deepest cosmological hunches - your sense of the vocabulary of coherence that obtains in the world.

- from Where the Words Come From: Canadian Poets in Conversation, Ed. Tim Bowling, 2002.

The first 3.5 minutes of Bill Clinton's speech at the Democratic National Convention. Imagine a near-constant shriek of applause in the background:

That was 40 "Thank yous", if you're keeping track at home. You can read the transcript of the speech here (it doesn't do justice to the opening, tho) and really, after an introduction like that, how could you resist?

UPDATE: Try as he might, Obama only got in 30 pre-speech "thank yous" tonight. He's got a lot of learning to do...
No comments:
Email ThisBlogThis!Share to TwitterShare to FacebookShare to Pinterest
Labels: quote

I just got the final list of contributors for the Rocksalt Anthology of BC Poetry I mentioned early - quite heady company:

The book is going to be launched all over the place, including two launches in Vancouver:

I'm planning on attending both, if anyone is interested in tagging along - it should be fun.
No comments:
Email ThisBlogThis!Share to TwitterShare to FacebookShare to Pinterest
Labels: community

The case could be made, and made well, that this disparity is simply a result of my comparative disregard for the latter blogs, but instead I've chosen to conclude that it's a sign of the growing popularity of Ghanaian poetry on the interweb, which makes me very pleased.

This week we are featuring another new poet for whom OGOV is his first publication. He's a 21 year old who is already running a poetry reading series in Accra - a feature of a healthy poetry scene that was almost non-existent in the city when I was living there less than two years ago. Check it out!
No comments:
Email ThisBlogThis!Share to TwitterShare to FacebookShare to Pinterest
Labels: OGOV, personal

A new issue of Red Fez has just come out and after a one-issue hiatus I'm back helping edit the thing. My two favorites of this issue are "for k" by Jeff Van den engh and "Oceanic" by John Grey.

Another great addition to this issue is the online debut of Leopold McGinnis' 500+ page monster-novel "Game Quest". You can download the whole thing (wow!) here, then you can get swept away by it and buy a dozen copies of the paper-and-ink version.
No comments:
Email ThisBlogThis!Share to TwitterShare to FacebookShare to Pinterest
Labels: community, Red Fez 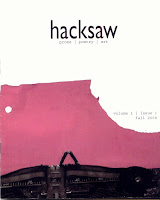 I just got my contributor's copy of the first issue of Hacksaw Magazine, a new lit mag started up by a fellow High Altitude Poetry alum (see my post on the submission call here).

It's a sharp little thing, obviously assembled with care, and is worth checking out (if only for the tiny, sealed manila envelopes on pages 6 + 7 which contain secret answers...intrigued?).

If you'd like to order a copy (they are three bucks a pop!), purchases can be arranged by emailing them at hacksawzine(at)gmail(dot)com.

Below is a scan of my contribution, a poem called "Lost Histories" (click on the image to enlarge): 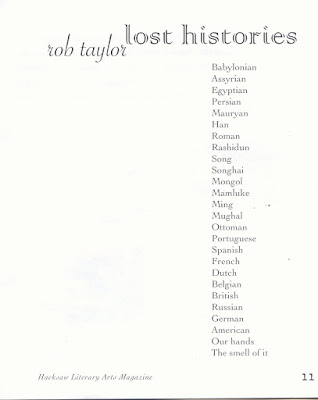 No comments:
Email ThisBlogThis!Share to TwitterShare to FacebookShare to Pinterest
Labels: community, poem

My publishing schedule for One Ghana, One Voice got all messed up this week, so I decided - out of desperation - to look into just where all our poets were coming from.

I did something similar to this in April, when I reviewed our author's favourite poets.

The new summary, "Mapping OGOV Poets", can be read here.
No comments:
Email ThisBlogThis!Share to TwitterShare to FacebookShare to Pinterest
Labels: OGOV

The "Orwell Trust" is putting entries from George Orwell's diary on a blog, one per day, exactly 70 years after each was written. It starts tomorrow. Neat!
No comments:
Email ThisBlogThis!Share to TwitterShare to FacebookShare to Pinterest
Labels: community

1. Try to publish this in the Portage Daily Graphic.
2 comments:
Email ThisBlogThis!Share to TwitterShare to FacebookShare to Pinterest

this is why you cuil your name, people

As I've noted before, much good can come from Googling your name. By Googling my name, I once found that a poem of mine had been published, without any notice to me of that fact, six months prior.

Well, now I can add "Cuiling" your name to that list of good ideas. I just gave this new search engine, Cuil, a spin, and it unearthed something that broke my previous record for unreported publishings.

Apparently the editors of the Spillway Review, an online mag out of Louisiana which (seems to have) shut down following Katrina, published a poem of mine and simply forgot to link my poem to the main page of their "Water" issue.

This happened way back in 2005, when I was first submitting to lit mags and sites. Needless to say, I was quite excited to be accepted by someone (they did send me a note saying the poem had been accepted and would be included). When nothing came of it post-Katrina, I was disappointed, but certainly understood. Looks like it was just a forgetful editor, though, not a complete collapse of the site.

Three years between publication and author "notification"... that's gotta be some kind of record.

Anyway, I went on to get the poem published in the Mutanabbi Street Memorial fundraising chapbook, so it still found a home. Little did I know at the time, it had an online home, too. Here it is: