The Border Terrain: An Interview with Sadiqa de Meijer

An excerpt from this interview was published in ARC Poetry Magazine's Summer 2021 issue.

Ancestor vs. Ancestor – Sadiqa de Meijer
The darkness then was darker than we know;
it never left the corners of a room,
rose velvetly from cellars, where it blinded the potatoes—
like curd it formed a film on wooden spoons.
Grains of darkness clustered between brothers.
Dark moisture kept the cabbage leaves apart.
All over the old country, there were nights: no hands, no ground.
You’ve never really seen the stars.
And what was in it? Specters, wraiths—they spooked the horse.
Some things that people did.
A continent was dark. It could be what we wanted.
Animists, ivory, pith of strange fruits. We must have been,
for all intents, asleep.
When those nations flickered and were lit,
there was no fault to speak of.
And we didn’t speak of it.

Reprinted with permission from
The Outer Wards
(Signal Editions, 2020).
--- 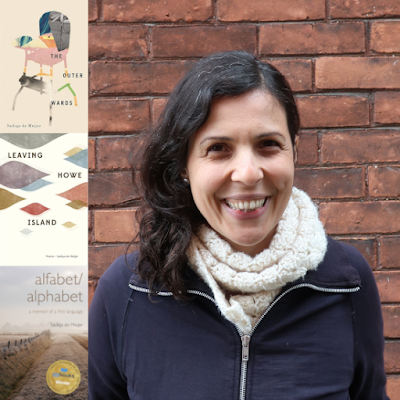 "A is for Acholi" by Ontoniya J. Okot Bitek 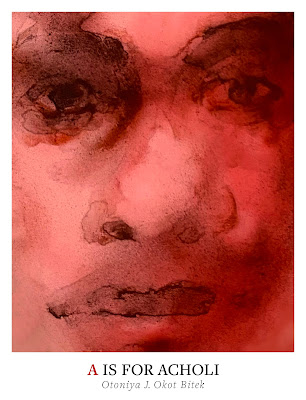 It's been six years since Otoniya J. Okot Bitek published her debut poetry collection 100 Days, which powerfully revisited the one hundred days of the Rwandan genocide. I was lucky enough to interview Otoniya shortly after that book came out - you can read that interview here. 100 Days went on to be shortlisted for the Dorothy Livesay, Pat Lowther and Robert Kroetsch awards, among others.
I've been waiting patiently for Otoniya's next book - and I need wait no more! Her new book, A Is For Acholi, will officially be published next week. As the titled suggests, this book focuses attention on her people, the Acholi of Northern Uganda.
A bit of a side note: Song of Lawino, the most famous work by Otoniya's father, Okot p'Bitek, was originally written in Acholi. p'Bitek opened the English translation of the book with a note that read: "Translated from the Acoli by the author who has thus clipped a bit of the eagle's wings and rendered the sharp edges of the warrior's sword rusty and blunt, and has also murdered rhythm and rhyme."
Here's an excerpt from A Is For Acholi, which shows that Otoniya's rhythm is alive and thriving:

The book ranges more widely than the tight thematic and stylistic focus of 100 Days. Its subject matter includes "exploring diaspora, the marginalization of the Acholi people, the dusty streets of Nairobi and the cold grey of Vancouver." Formally, the book is wide-ranging as well: lineated poems brush up against prose poems, concrete poems, erasures and - in keeping with Otoniya's 2019 chapbook Gauntlet - voluminous footnotes.
Otoniya recently went and moved away from cold grey Vancouver (to far colder Kingston, Ontario!), but she's making a very welcome return for two events at the Vancouver Writer's Fest later this week: Poems for the Twelfth Hour on Friday, October 21st, and Poets in Conversation the following day.
Do consider checking out the events, or picking up the book, or - gold star for you! - both.
---

Otoniya J. Okot Bitek is a poet and scholar. Her collection of poetry, 100 Days, was nominated for several writing prizes including the BC Book Prize, the Pat Lowther Award, the Alberta Book Awards and the Canadian Authors Award for Poetry. It won the 2017 IndieFab Book of the Year Award for poetry and the 2017 Glenna Lushei Prize for African Poetry. From the fall of 2020 to the spring of 2021, Otoniya was the Ellen and Warren Tallman Writer-in-Residence and one of the SFU Jack and Doris Shadbolt Fellows. She has recently moved to Kingston, Ontario, to live on the traditional territory of the Haudenosaunee and Anishinaabe people. Otoniya is an assistant professor of Black Creativity in Queen’s University, Kingston.
No comments:
Email ThisBlogThis!Share to TwitterShare to FacebookShare to Pinterest
Labels: community, review, Wolsak & Wynn

"Openwork and Limestone" by Frances Boyle 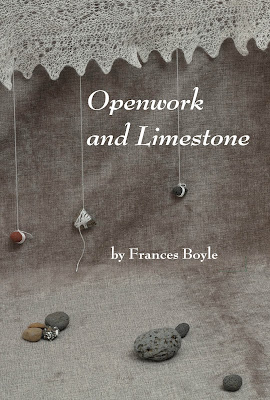 Ottawa-based writer Frances Boyle has been busy in recent years. Since 2018 she's published four books: a novella, Tower, in 2018, followed by a second collection of poems, This White Nest, in 2019 and a short story collection, Seeking Shade, in 2020. (The latter was a finalist for the Danuta Gleed and ReLit awards.) After taking a year off to catch her breath, Frances is back with her third poetry collection, Openwork and Limestone, published by Frontenac House.
Here's a sample poem from the book:

Strange Scattered Year
I cobble together some shape like stars,
gas cloud of spangles, sensory noise
a beautiful typeface of serifed
angels and italicized galaxies. Last year
declines to cohere. I’m out of practice
reaching for the shelf
to take down fragments rattling
in their sealer jar. Bright ring
and clamouring disk with its ovoid dance
on tabletop or dark drift of space.
Dust of that year toxic to breathe;
I need a particulate mask to filter it.
That year, melded by star-shine,
stuck to those before and aft, adhesion
of moist exhales. Trial and tributary, ribbon
of spilled milk. I gather it in handfuls,
sop it up, recap the static, staccato
tumbling voices, eerie dance
of memory. The monitor dial inches
through situations half-heard. A moving line,
a pointing finger. Evidence in star systems
we pretend are fixed. His belt, her chair.
Try to slake my thirst with what, I believe,
is a firm grip on the ladle’s hilt.

"Last year declines to cohere." Goodness, yes. This poem backs up the book's jacket copy (a rarity!), which says the book "turns inward and outward at the same time, telling our multifarious collective human story so that it feels like our own intimate family history."

When someone puts out so many books, so quickly, it can seem like a sign of a sudden outburst of productivity, but is more likely the result of the slow accumulation of high quality work, which, for whatever reason, finally arrives in the hands of enthusiastic publishers. Frances suggests as much on her website: "I've been making stories since before I could hold a pen. I've written most of my life, with pauses or minimal output during years of raising a family and working in the legal field. Since being able to devote more time to my craft, my short stories and poems have been published..."

One downside to having so many books published quickly, and having them come out in and around a pandemic, is that - like, I assume, giving birth to quadruplets - it's hard to give each individual the attention it deserves.

The busyness that kept Frances from publishing most of her books until recent years was also likely tied to being steadily on the move: raised in the Prairies, she went to school in Regina, then had stops in Toronto, Montreal and Vancouver before settling in Ottawa. (Sorry Maritimes, no Frances for you!)

We're lucky to have Frances finally making a trip back to Vancouver, to celebrate not one, but two of her books (COVID having prevented her from traveling to promote Seeking Shade). She'll be joined by special guests Steffi Tad-y and Ellen McGinn for a free reading at People's Co-op Bookstore next Tuesday, October 18th at 7 PM.

Steffi Tad-y will be celebrating her own debut collection, From the Shoreline (Gordon Hill Press, 2022), and Roll of Nickels favourite Mariner Janes will be there hosting (you can read my interview with Mariner here). 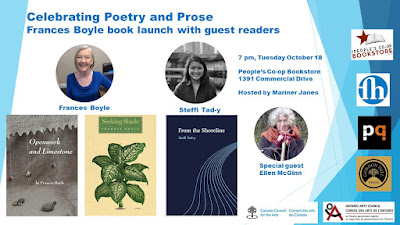 I really encourage you to take in the event (a Writer's Fest worthy lineup without the $25 ticket price!), and if you can't make it, to pick up Frances' and Steffi's books.

Frances Boyle’s previous books include the poetry collection This White Nest (Quattro Books 2019), Tower, a novella (Fish Gotta Swim Editions 2018), and Seeking Shade (The Porcupine’s Quill 2020), a short story collection which won first place for short fiction in the Miramichi Reader’s Very Best! Awards and was a finalist for the Danuta Gleed Award and a ReLit Award. Her writing has been published throughout North America and internationally. Born and raised on the prairies, Frances lives in the historic Lindenlea area of Ottawa, with her partner Tim and a large and slightly eccentric standard poodle. Openwork and Limestone is her third poetry collection.
2 comments:
Email ThisBlogThis!Share to TwitterShare to FacebookShare to Pinterest
Labels: community, Frontenac House, review

Rolling Down a Hill With Your Brain on Fire: An Interview with Andrew Chesham and Laura Farina (feat. a poem by Krys Yuan!)

The following interview is part seven of a seven-part series of conversations with BC poets which I released between January and April 2022. All eight interviews were originally posted at ReadLocalBC.ca. This was the third year of my collaboration with Read Local BC (you can read the 2019 interviews here, the 2020 interviews here, and the 2021 interviews here).

my father is dying – Krys Yuan

lying my back across the grassy sand
resting my eyes against the glare of the sun
pulling my feet towards the ocean between us
imagining that pain irradiating one half of my dna
my father is dying and i’m still going to the grocery store
i line my grocery cart with knowledge of produce that he’s
given me:
extra fish eyes means bright eyes
black rice vinegar eases any stomach
rock sugar lilts our mother tongues
my father is dying and i’m still going to be writing
how ridiculous is it that his body eats his dreams
shrinking the edges of his world
composting his future
while my body eats away, ballooning,
blossoming 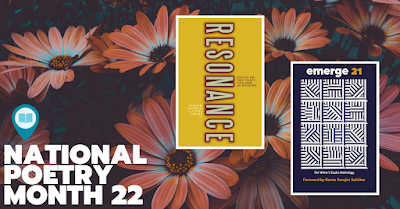