the baby frogs would not stay put - "the weight of dew" Book Launch, Part Two

from the weight of dew
(Mother Tongue Publishing, 2012).
Reprinted with permission.
On Monday I posted part one of my interview with Daniela Elza, who will be launching her first trade collection of poems, the weight of dew, this Sunday at the Railway Club: 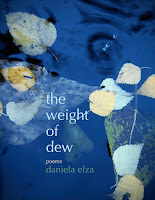 Book Launch for the weight of dew by Daniela Elza
Sunday, March 11th, 5:30 - 7:30 PM
The Railway Club (Private Room in back)
579 Dunsmuir Street, Vancouver
Featuring: A reading from Daniela, and good company!
Free!

In the second half of the interview we talk, among other things, about her travels through the interior of BC, which inspired much of the book. Alternate titles for this post, as generated by the interview, include "I hope this does not sound like it was a project" and "Ask me another day and I might think differently". I hope you enjoy, and if you want more context on the book or some of the questions, please be sure to read part one here.

Rob: The largest section of your book is devoted to a suite of poems built around a trip (perhaps multiple trips) you took through the B.C. interior. What made those travels so productive for you, poetically? Did you compose the majority of those poems while you were traveling, or later, looking back?

Daniela: This was our first trip around BC after landing in Canada in 1999. In 2005 we took about 20 days to travel and were constantly on the move with two days (at the most) in any given place. It also happened in parallel with my studying Philosophy of Education up at SFU. I was steeped in big ideas confined to musty books. At the same time I was seeing this beautiful province for the first time. I was seeing it both through my children’s eyes and through my eyes which had acquired the child-like quality they acquire when experiencing something for the first time. I am sure I was writing and taking notes of impressions and first responses. Some poems might have happened or started on the trip, but most I believe happened throughout the following year. And some on other trips.

The next summer we went to Horne Lake on Vancouver Island. We camped there for a whole week to counter the intensity of the trip from the year before. I remember sitting on the shore of Horne Lake and working on these poems to the sound of the waves while my children were building rock castles for the tiny frogs they found. They kept putting them inside the castle, only to come back and find the baby frogs would not stay put. Very much the struggle I was experiencing with my words. So both. Some immediately. And then looking back. I had most of that section written within a year.

I hope this does not sound like it was a project. Most of the time you do not know where you are going until you get there. In hindsight you begin to understand what you were up to. Discovery and learning happen there. I love that about writing and poetry.


Rob: Back to the chicken-and-egg questions: generally speaking, did the "B.C. interior" poems start with your philosophical/political/etc. concerns which you then grounded in the physical elements (trees, lakes, rocks, highways, valleys) of the B.C. landscape, or did you start with the things you were interacting with (and traveling through), and let the poems expand out from there?

Daniela: Both. Back and forth. It was one big irreversible chemical reaction (have we shredded the chicken-and-egg problem yet?). For instance, I experienced Spotted Lake without any background knowledge at first. The ideas and the questions were there for the plucking (forgive the pun). The childlike awe and wonder, the shedding and emptying, the clarifying that happened on the trip managed to embrace, locate, and bring them home. Helped me also find a sense of home in this new place, in this slippery language.


Rob: the weight of dew features a generous and insightful introduction from poet, and occasional silaron house guest, Aislinn Huner (in which she rightly notes, among other things, that your poems feature "the kind of thought that demonstrates just how slippery thought, feeling, and language are"). This kind of introduction isn't terribly common in single-author collections these days, and I'm wondering how you interpret the introduction in regards to (to use one of Aislinn's favourite terms) the "paratexts" of the book. To me, a blurb on the back of a book is "outside" the book - it's part of the world of posturing and marketing and not part of the internal "thing" that is the book (I'd put the bureaucratic page where they list the ISBN and such in this category too), whereas, say, the notes and acknowledgments at the back of the book are important "paratexts" that are part of the book's contents. Do you feel the same? And if so, where would you place an introduction like Aislinn's in that dichotomy, which has its blurb-like elements (including that it's authored by someone other than the poet), but is longer and devoted to a deeper consideration of the poems? Ultimately, what I mean is: do you think of it as an internal part of your book, or as a (very lovely) outside addition?

Daniela: The poetry books that Mother Tongue Publishing puts out all have an introduction. That is how they are conceived by the publisher. Aside from that, what does this introduction mean to me? My initial response is to think of it as very much in line with what I do. Which is bringing other voices into the conversation. Aislinn’s voice engaged in the conversation at a crucial for me moment. I found Aislinn’s reading very perceptive. I was actually spooked a bit. She put her finger on a range of things I was hoping the book was doing and saying. If I were to tell you it is doing those things I may easily be deluding myself. But when someone else sees that, then there is an affirmation, and a conversation. So for me it became integral in the process. I also cherish the link created between an established writer and an emerging one. Perhaps the introduction plays the role of an inbetween, not entirely outside, not entirely inside. For you as a reader this section might be perceived differently. Maybe you want to read it after you have experienced the book, formed your own thoughts about it. Ask me another day and I might think differently.


Rob: Your poems are visually creative, and rely on your very intentional use of space on the page, but at the same time so many of the choices you make on the page are used to emphasise tonal shifts, pauses, breaths, etc. I think here especially of a poem like "presence", which is filled with punctuation, italicization, and spacing choices that transform how you read the poem, and yet the poem is fundamentally an exploration of breath, and space, and (in my mind) the resonance that results from vocally releasing the words of the poem into the world. So my question is: if your poems have a primary existence, would you say that it is an aural one, or one bound to the printed page? If you had to choose between them your poems read in silence, or heard aloud, which would you prefer?

Daniela: In the process of creating the poem I believe they scaffold each other. I have a sneaky suspicion that aural might be primal, though the poem is birthed on the page.

When you are listening to the poem you are likely not engaging with the text and visual play (though I always hear my voice even when reading silently). As a reader or listener the visual and the aural provide different experiences. I like to think of my work doing that. These are different spaces. Visually things and thinks happen that you cannot experience aurally.

Sometimes the poems get unruly on the page and send me looking for new ways to read them. All in service, I hope, of getting to the sacred. feeling. of. what. it. is. to. be. alive. in. this. body. in. this. moment.


Rob: In a few days, you're going to send your first book out into the world. Do you have any parting thoughts for it? Hopes and aspirations? Warnings? Do you think you'll be the kind of "parent" who'll stay up at night worrying about it, or will you trust in it and let it go?

Daniela: A kind of parting it is. But, wait, I already parted with it. Perhaps numerous times. Now I am welcoming the printed artifact. It feels like having carried a child (for about 7 years) and now you are looking into his blue eyes for the first time. So I have welcoming thoughts, while at the same time a sense that there is a letting go. A shedding of skin. I have aspirations, and aspirin, too. Warnings? It changed me. The printer’s machine broke [editor's note - true story!]. You decide.

Sending anything out into the world is a risk, and a blessing. You always worry. I hope I do not have too many sleepless nights. Lately, I have gone over my quota on that and cannot afford too many more. I will have to trust it, just as I trusted in the lengthy process that got me here. Ultimately, I will remember the joy of doing the work and the love for the world it inspired. The sheer delight of sitting still with myself and the word, exchanging thoughts with trees and pebbles, with rivers, bees and blades of grass.

the weight of dew can be ordered through the Mother Tongue Publishing website, and should be in local bookstores any day now. Of course, you can also pick it up at the book launch on Sunday!
Email ThisBlogThis!Share to TwitterShare to FacebookShare to Pinterest
Labels: community, Daniela Elza, interview, Mother Tongue Publishing, YVR launch interview series