A Real Donnie Brasco Situation: An Interview with Shaun Robinson

An excerpt from this interview was published in CV2 Magazine's Fall 2021 issue.

Chelsea Motel - Shaun Robinson
A man on the sidewalk carries a chair on his head
like a set of cast-iron antlers. It must be nice
to always have somewhere to sit, though hard
on the neck. I probably look that awkward
bearing my clumsy love through all these doorways
and Tuesdays, trying not to get tangled in awnings.
If it were fabric, I’d drape it over my arm to save you
a seat in the restaurant. It’s weird, Chelsea.
Whenever I text to ask what I should order,
my phone changes Malbec to becalm, like a bartender
saying I’ve had one too many. Let’s settle
for Caesars and hope they don’t turn into race cars
by the time they get to the table. Back at my motel,
there’s a sign on the wall that starts a sentence
with If you discover a fire and ends it with a map.
As if fire were some new Florida and we were at sea
on a queen-sized raft. But you can find fire
anywhere, Chelsea. If you ask at the desk,
they’ll give you a book of matches.
And the waiter is moving from table to table
with a lighter and a candle.

Reprinted with permission from
If You Discover a Fire
(Brick Books, 2020).
--- 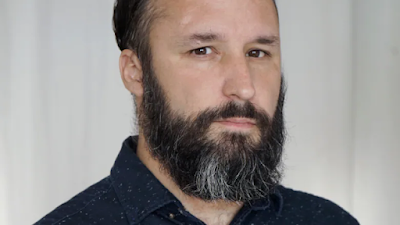 Shaun Robinson’s poetry has appeared in The Puritan, The Malahat Review, Prairie Fire, Poetry Is Dead, and the Rusty Toque, and received Honourable Mention in ARC Magazine’s 2018 Poem of the Year contest. Born in 100 Mile House, BC, Robinson has lived in Vancouver since 2006. He studied in UBC’s Creative Writing MFA program, where he served as the poetry editor of PRISM international. He is also the author of the chapbook Manmade Clouds and currently works as an editor for the chapbook press Rahila’s Ghost. If You Discover a Fire is his debut collection.
--- 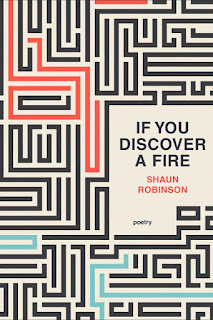 Rob Taylor: It doesn't take long to discover a fire in your debut collection, If You Discover a Fire (Brick Books, 2020). The book's opening poem features matches and cigarettes, and some manifestation of fire/matches/flames appears in more than a quarter of the poems (yes, I counted!). What is it about fire, and the potential for fire, that keeps you returning to it? Are you part moth?
Shaun Robinson: Fire is both completely common and kind of magical, which is what I'm aiming for in my poems. I'm thinking in particular of the free books of matches you can get at a hotel or restaurant or gas station—it’s a minor miracle that a little strip of paper with a few chemicals on the end can turn into this tiny jewel of flame, and then flame can light a cigarette or candle or campfire or barbeque, or light up a dark room, or burn a letter, or start a forest fire. Fire is a very powerful force that many of us carry around in our pockets without giving it a second thought.
RT: You certainly give it second, third, fourth, fifth…. thoughts! One of your “fiery” poems, "How Soon, How Likely, How Severe," jumped out at me when I read it in ARC, and I selected it for inclusion in Best Canadian Poetry 2019. In your author’s note at the back of BCP 2019, you write that you were required to take a Forest Fire Suppression course while working on a tree-planting crew. How did that experience—both the training and the working all day in a tinder box, planting new little matches—influence how you wrote about fire?
SR: I think they're different kinds of fire. The fire in most of my poems is a metaphor or a turn of phrase—the title of the book, for example, comes from the emergency maps posted in apartments and offices and hotels. This was more of a work poem than anything for me. I was interested in the jargon, in the concrete images I came across doing the work, in what it was like to get through a fifteen hour work day or a fourteen day shift. In what you have to shut down in yourself to get through that.
RT: Getting through long days of manual labour features in a number of your poems: at one point in If You Discover a Fire, you describe your years of tree-planting as carrying "a tiny forest in a pair of bags / on my hips, wandering through the aftermath of catastrophe, wondering where I should put it." It's tempting to draw comparisons between tree planting and poem writing—placing and placing these little possibilities in the ground and hoping they'll grow—but in other ways, of course, they are wildly different. Did you write much while you were tree planting?
SR: I would write almost nothing in the course of a tree-planting season. On a good day off I might take down a few lines in a notebook, but in general I've found that manual labour makes impossible the kind of sustained attention that allows me to produce poetry.
RT: Though you didn’t write, did you learn anything that has proved useful in your writing life?
SR: The valuable thing I got from bush work was time. When I was younger I could make enough in four or five months to take the rest of the year off. I had much more freedom in the off-season to pursue my art than I would have in a normal profession that required year-round attendance.
RT: In "The Future Lives Here" you write:

I couldn't believe I'd moved to the city
to be trapped in a truck
with this Prince George hick,
a dead ringer for every man I'd known
in seventeen small-town years. 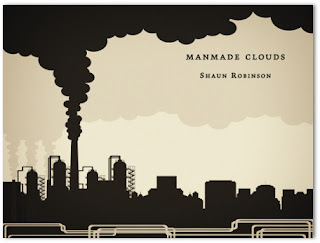