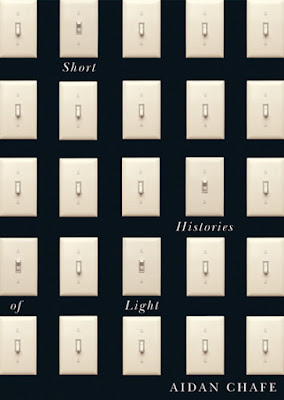 He works as a high school teacher in New Westminster and during the summer he runs a reading series through the Royal City Literary Arts Society called Poetry in the Park. Originally from BC’s Fraser Valley, he now calls Burnaby home.

In his debut collection, Short Histories of Light, Aidan Chafe recounts his Catholic upbringing in a household dealing with the common but too often taboo subject of mental illness.

In unflinching fashion, Chafe reveals the unintended disasters that follow those who struggle with depression and the frustration of loved ones left to pick up the pieces. Other sections of the book shine a light on the wounds inflicted by systems of patriarchy, particularly organized religion, and the caustic nature of humanity. Imagery and metaphor illuminate Chafe’s writing in a range of poetic forms, both modern and traditional. A boy stares helplessly through the walls of the family home, watches “filaments in glass skulls buzzing.” A father’s birthmark is described as a “scarlet letter.” Grandma is portrayed as a “forgotten girl on a Ferris wheel of feelings.”

Vivid and haunting, at once tender and terse, Short Histories of Light captures what it feels like to be a short circuit in a world of darkness.

McGill-Queen's University Press * About This Series * More Books, Please!
The copyrights of all poems included in the series remain with their authors, and are reprinted with the permission of the publishers.
Email ThisBlogThis!Share to TwitterShare to FacebookShare to Pinterest
Labels: BCPoetry2018, community, McGill-Queens, review