BC Poetry 2016: "The Bird in the Stillness" by Joe Rosenblatt (Porcupine's Quill) 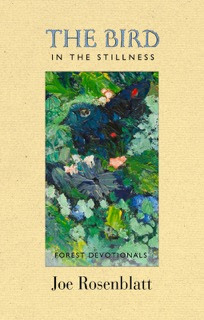 There are many haunting spirits in these silent woods.
I feel their presence as I wander along a winding trail.
Hearing the sound of splintered wood in a falling tree
I’m made aware that a beginning is ligatured to an end.
A garter snake sloughs off its skin to grow another hide.
In envy, I dare to ask: why don’t I have that kind of magic?
I’d gladly become his shadow undulating in the daylight
and shimmy on the ground beneath some ghostly moss.

Moving like a millipede the darkness nibbles on a soul.
There’s nowhere for me—time itself faces devourment
for as I’m being nibbled, there’ll be nothing left to view.
Under the Green Man’s foliated face a grim visage is hidden
that bears a frightful resemblance to the maker of this sonnet.
I’ll need to let some sunlight in to make my psyche greener. 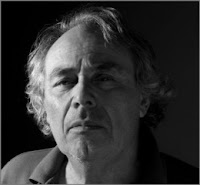 Joe Rosenblatt is an accomplished author and artist who, over the course of a five-decade career, has produced over twenty books of poetry, fiction, non-fiction and visual art. He was the second poet to be published by Coach House Press, which released The LSD Leacock in 1966. Rosenblatt has since received several major awards, including the Governor General’s Award for his poetry collection Top Soil, as well as the B.C. Book Prize for Poetry Hotel in 1986. He lives in Qualicum Beach on Vancouver Island.

Joe Rosenblatt’s latest collection of poems, The Bird in the Stillness, provides a rich buffet of physical, spiritual and artistic nourishment for any pilgrim who cares to walk the woodland path ... and acknowledge that his warranty on breathing might be nearing its expiry.

"These poems are roots and foliage, a world Rosenblatt inhabits, imaginary or not. In the dark forest there is always the light inside a tree, glowing through the bark, like Rosenblatt’s poetic voice, what he calls "that sylvan part of me". The Green Man, or Rosenblatt, lounging in a hollow of the tree." — Patrick Friesen

Purchases: The Porcupine's Quill's website, or at your local bookstore. $16.95.

Porcupine's Quill * About This Series * More Books, Please!
The copyrights of all poems included in the series remain with their authors, and are reprinted with the permission of the publishers.