BC Poetry 2016: "How to Be Eaten by a Lion" by Michael Johnson (Nightwood Editions) 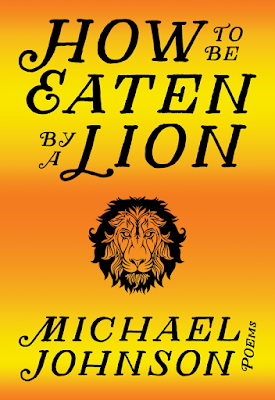 The Church of My Mother’s Hands

Her sweet loom and thread
wove our days
with awe. From the dirty lace
of corner cobwebs: dead
moths, bluebottle fly fossils;
and raven loot hoarded
in rafters and slatboarded
gables. From windowsills:
mirror and beads, brass
and keys, his own nightblack
down. His vanity at bric-a-brac
made Mom pause her trespass
into ravendom: who could take
his nest of rookery fluff
and feathers long cast off,
this salvage we mistake
for stolen? Foil, porcelain,
and rumpruff of sunbird,
remnant mange of a blurred
hummingbird’s cousin
stunned at our window,
revived by her healing,
delicate hands, bringing
the fallen back. O light, O
sweet hour, when else
are we so recklessly beautiful?
Dare the days and moonful
nights to forget this pulse:
Sunbird, caged
in bonehollows, fires
for feathers. All our hours
slowed; we aged
one immeasurable breath
as she lifted him, laid
a hand, prayed
he pass into arms Death
might fear, staring
with me and my brother,
as that bird, raised high in her
hands, took wing. 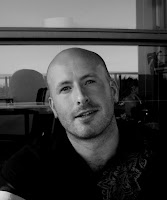 Michael Johnson's work has appeared in numerous literary journals including The Antigonish Review, The Fiddlehead,The Malahat Review, PRISM International, Mid-American Review and Gargoyle. He was a finalist for Poetry Magazine's Ruth Lilly Fellowship and the Bronwen Wallace Award for Emerging Writers. He was nominated for the Pushcart Prize and, in 2014, won the Dr. Sherwin W Howard Award for best poetry in Weber: The Contemporary West. He lives in Penticton, BC.

From the monk who sets himself on fire in a crowded intersection of Saigon (“the familiar corded tendons of his hands, become / a bracken of ashes, a carbon twine of burnt”), to the salmon run in British Columbia (“The salmon word / for home is glacierdust and once-tall trees unlimbed, / a taste, no matter where, they know”), Johnson writes of topics varied and eclectic, unified by a focus on moments both declining and revenant.

Startling and haunting, the poems delve into the ways in which these moments are transformative, beautiful and unexpected. Being eaten by a lion is a gift rather than a loss, an opportunity for grace: “Instead, focus on your life, / its crimson liquor he grows drunk on. / Notice the way the red highlights his face, / how the snub nose is softened, the lips made / fuller; notice his deft musculature, his rapture.”

Lyrical and rich with visceral imagery, How to Be Eaten by a Lion lingers, exploring the world with an eye for detail and an ear for music.

Read the book and find out. Yum!