BC Poetry 2016: "He Leaves His Face in the Funeral Car" by Arleen Paré (Caitlin Press) 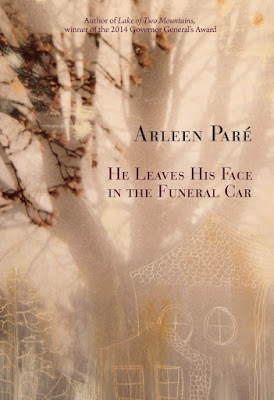 Nine reasons to prefer the pear

Arleen Paré is a Victoria poet and novelist, with an MFA graduate in poetry from the University of Victoria. Her first book, Paper Trail, was nominated for the Dorothy Livesay BC Book Award for Poetry and won the Victoria Butler Book Prize. Her second book, Leaving Now, a novel, was released in 2012. Her Lake of Two Mountains won the Governor General’s Award for Poetry and was nominated for the Victoria Butler Book Prize.

He Leaves His Face in the Funeral Car is elegiac, lyrical, ironic; a series of reflections, recollections; a collection about relationships. To leave a face in the funeral car is to fall out of time, to fall into history, ponder dust, the quiet records of suicide. This is poetry that covers the strangeness of everyday life buoyed by the solace of language, the pleasure of song.