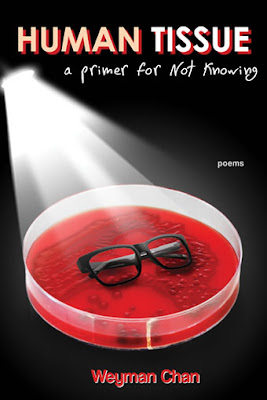 But I’m No One
for M. Maylor

Dear Anne Carson:
My friend read me the poem where your mom
said that the dead walk backwards.
You thought this myth arose from poor translation.
I can attest to your misapprehension.
My social studies teacher in grade 8, Ms. Rogers,
believed it was customary for the Chinese
to walk backwards when entering a washroom.
So when our class went to Silver Dragon for lunch,
that’s what we did, giggling, even if we didn’t have to go.
But in my family, we never believed this.
Where do ideas like that come from?
It’s true that regret looks back, that death’s shadow follows
us, and your only true companion is solitude,
whose clarity will fade to black.
It makes sense that the face of death must
be turned our way. We’re still here.
I have to read lots in order to find
what’s useful, Ms. Carson.
To walk backwards is to safeguard not-knowing: in the end,
my striving can’t reach more than this. Than this.

Weyman Chan was born in Calgary, Alberta, in 1963, to immigrant parents from China. Chan wrote his first poem when he was thirteen years old. He has published poems and short stories in a wide variety of literary journals and anthologies. He won the 2002 National Magazine Awards silver prize for his poem “At work,” and the 2003 Alberta Book Award for his first book of poetry, Before a Blue Sky Moon. His second book, Noise From the Laundry, was a finalist for the 2008 Governor General’s Award for Poetry and the 2009 Acorn-Plantos Award for People’s Poetry.

These poems try to get along with each other – but can’t. The series of poems titled “Parables for Frankenstein” traces the socialization and making of a prototype misfit. “Panic Room” is a series of poems about a loner whose isolation at a house party starts taking a sinister turn. “Unboxing the Clone” deals precisely with the simultaneous interpenetration of terms that bombard the conscious moment to reshape the life that’s being lived out – a kind of proprioceptive kaleidoscope. Alienation arises from all the failed language-registers of our technocratic society, which continue to defy our powers of decryption. What’s a monster to do?

A recurring motif throughout the book is the overarching empty universal space surrounding life’s not-knowing. If we think too hard on it – why the statistical fluke that puts us here on this ball of dirt – we’ll have a stroke. Instead, read these poems.

Purchases: The Talonbooks website, or at your local bookstore. $17.95.

Talonbooks * About This Series * More Books, Please!
The copyrights of all poems included in the series remain with their authors, and are reprinted with the permission of the publishers.