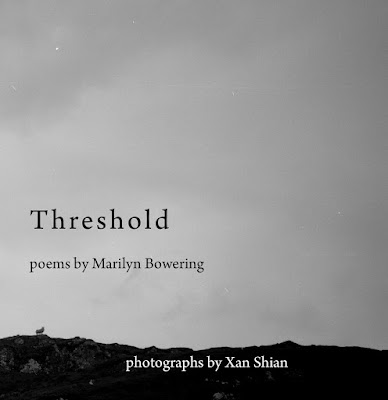 On thine hip a heavy quiver flawlessly shaped, on thine
head a crest from the wings of the eagle. 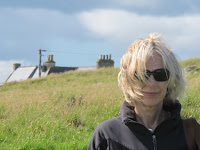 Marilyn Bowering is a poet, novelist and non-fiction writer who lives in British Columbia. She has received many awards for her work including designation of Notable Book by the New York Times, short-listing for the world-wide Orange Prize and a number of prizes named after women poets (Dorothy Livesay, Pat Lowther and Gwendolyn MacEwen). She is the librettist for the opera Marilyn Forever (with Gavin Bryars).

The words of Threshold are plain, as bare and pregnant as the stones of a ruined croft. Marilyn Bowering unites her voice with the life and words of a silenced, exiled female Hebridean poet who speaks across three centuries. Xan Shian's photographs face this world of extremes and change with a timeless and contemporary eye.

Purchases: From the Leaf Press website or at your local bookstore. $20.

Leaf Press * About This Series * More Books, Please!
The copyrights of all poems included in the series remain with their authors, and are reprinted with the permission of the publishers.