BC Poetry 2016: "The Resumption of Play" by Garry Geddes (Quattro Books) 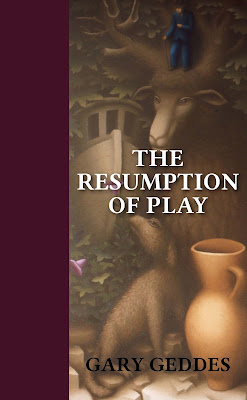 A Song of Recall

And so it is with longing, you extend a hand
into the mist expecting to take hold of something
lost, perhaps the very thing you’d yearned for

but could not claim, a dream-shape, an unwritten
melody, insistent, that flitted in and out of your days
leaving its residue on your pillow, the faint smear

on an otherwise blank page, a colophon of desire.
You glimpse an apron, blue, with a pale, stitched
hem, a smudge of flour near the generous pocket,

enough to hold for a moment that lost mother
disappearing into the night who might, just might
be yours, wisps of her long dark hair surviving

cancer, surviving the flames, making a mockery
of memory itself, that insatiable canvas needing
to be filled, framed, needing to have occurred. 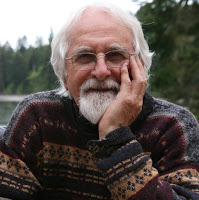 Gary Geddes has written and edited more than 45 books of poetry, fiction, drama, non-fiction, criticism, translation and anthologies and won more than a dozen national and international literary awards, including the Commonwealth Poetry Prize (Americas Region), the Lt.-Governor’s Award for Literary Excellence and the Gabriela Mistral Prize from the government of Chile, awarded simultaneously to Octavio Paz, Vaclav Havel, Ernesto Cardenal, Rafael Alberti, and Mario Benedetti.

The gripping title poem of The Resumption of Play, which won the 2015 Malahat Review Long Poem Prize, dramatizes the traumatic experience and enduring legacy of Canada’s Indian residential schools. The book is also about coming to terms with grief and loss, including a special elegiac sequence about the poet’s mother, dead at age 35, and another about Pound, Brodsky, Stravinsky and Diaghelev called “On Being Dead in Venice.” This exciting new cornucopia from one of Canada’s premier poets also includes two prison letters from Somalia and lyrics about Virginia Woolf, Bronwen Wallace, misogyny, obstacles to belief, and the healing power of poetry.

Book Launches: Back on March 15th, at Russell Books (Vancouver).

Quattro Books * About This Series * More Books, Please!
The copyrights of all poems included in the series remain with their authors, and are reprinted with the permission of the publishers.