BC Poetry 2016: "The Red Files" by Lisa Bird-Wilson (Nightwood Editions) 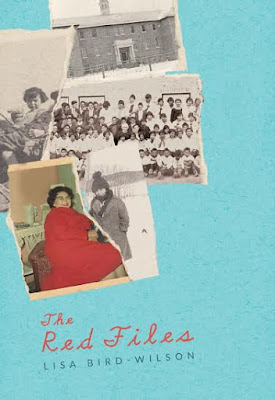 teacher catches them out
of sight behind the rectory
pulls their hair
flushed and inflamed
she pinches their legs
to hear them squawk
makes Agnes kneel
to lick Leona’s hand wound
a viscous curious bloom
clean, before sending them
to scrub floors
on prayer-bruised knees

Lisa Bird-Wilson is a Cree-Metis writer from Saskatchewan whose writing has appeared in a number of literary magazines and anthologies, including Grain, Prairie Fire, The Dalhousie Review, Geist, kimiwan, cîhcêwêsin and Best Canadian Essays. She is the author of the novel Just Pretending (Coteau Books, 2013). Bird-Wilson lives in Saskatoon, SK.

This debut poetry collection from Lisa Bird-Wilson reflects on the legacy of the residential school system: the fragmentation of families and histories, with blows that resonate through the generations.

Inspired by family and archival sources, Bird-Wilson assembles scraps of a history torn apart by colonial violence. The collection takes its name from the federal government's complex organizational structure of residential schools archives, which are divided into “black files" and “red files." In vignettes as clear as glass beads, her poems offer affection to generations of children whose presence within the historic record is ghostlike, anonymous and ephemeral.

The collection also explores the larger political context driving the mechanisms that tore apart families and cultures, including the Sixties Scoop. It depicts moments of resistance, both personal and political, as well as official attempts at reconciliation: “I can hold in the palm of my right hand / all that I have left: one story-gift from an uncle, / a father's surname, treaty card, Cree accent echo, metal bits, grit— / and I will still have room to cock a fist."

The Red Files concludes with a fierce hopefulness, embracing the various types of love that can begin to heal the traumas inflicted by a legacy of violence.

Embracing the various types of love.