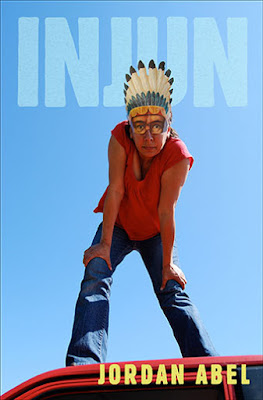 Jordan Abel is a Nisga’a writer currently completing his PhD at Simon Fraser University, where his studies focus on digital humanities and indigenous poetics. Abel’s conceptual writing engages with the representation of indigenous peoples in anthropology and popular culture.

His chapbooks have been published by JackPine Press and Above/Ground Press, and his work has appeared in numerous magazines and journals across Canada, including Prairie Fire, the Capilano Review, dANDelion, ARC Poetry, Descant, Broken Pencil, filling Station, Grain, OCW Magazine, Canadian Literature, CV2, and Canadian Literature. He is an editor for Poetry Is Dead magazine and former editor for PRISM International and Geist. Abel’s first book, The Place of Scraps (Talonbooks), was a finalist for the Gerald Lampert Memorial Award and the winner of the Dorothy Livesay Poetry Prize. Un/inhabited, Abel’s second book, was co-published by Project Space Press and Talonbooks in 2015.

Abel was named one of 12 Young Writers to Watch by CBC Books (July 2015). He lives in Vancouver, British Columbia.

Award-winning Nisga’a poet Jordan Abel’s third collection, Injun, is a long poem about racism and the representation of Indigenous peoples. Composed of text found in western novels published between 1840 and 1950 – the heyday of pulp publishing and a period of unfettered colonialism in North America – Injun then uses erasure, pastiche, and a focused poetics to create a visually striking response to the western genre.

After compiling the online text of 91 of these now public-domain novels into one gargantuan document, Abel used his word processor’s “Find” function to search for the word “injun.” The 509 results were used as a study in context: How was this word deployed? What surrounded it? What was left over once that word was removed? Abel then cut up the sentences into clusters of three to five words and rearranged them into the long poem that is Injun. The book contains the poem as well as peripheral material that will help the reader to replicate, intuitively, some of the conceptual processes that went into composing the poem.

Though it has been phased out of use in our “post-racial” society, the word “injun” is peppered throughout pulp western novels. Injun retraces, defaces, and effaces the use of this word as a colonial and racial marker. While the subject matter of the source text is clearly problematic, the textual explorations in Injun help to destabilize the colonial image of the “Indian” in the source novels, the western genre as a whole, and the western canon.

Purchases: The Talonbooks website, or at your local bookstore. $16.95.