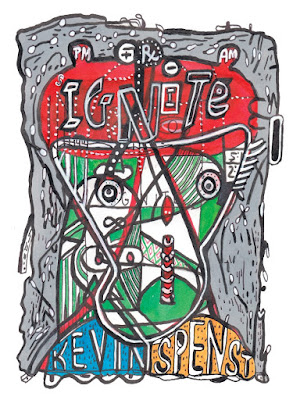 Trees wave over your
arrival in Kitimat, people of
the snow. Your first

job away from home,
a rigger on the rugged coast.
You wear the corkboots

of a hard man, hold
a cigarette aloft as snow-capped
mountains glare.

You hear cries in
the fall of cedars scratching
green out of the sky.

You get a blue and red
tattoo of Mother on your arm.
A stability badge. You cut

notches around anchor
stumps, swing an ax into a tree
screaming verdant. On

the river hundreds of slippery
slivers crosshatch the light into
a finger pointing at you.

So much foreignness,
you wonder where new
ends and you begin. 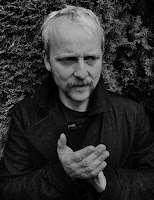 Kevin Spenst is the author of Jabbering with Bing Bong and ten chapbooks. He has done a one-man show at the Vancouver Fringe Festival and over a hundred readings across the country. His work has won the Lush Triumphant Award for Poetry and has appeared in dozens of publications including the anthology Best Canadian Poetry 2014. He lives and works in Vancouver, where he's an enthusiastic participant in a number of writing communities.

Ignite is a collection of elegiac and experimental poetry powder-kegged with questions about one man's lifelong struggle with schizophrenia. Born into a strict Mennonite family, Abe Spenst's mental illness spanned three decades in and out of mental institutions where he underwent electric shock treatment and coma-induced insulin therapy. Merging memory and medical records, Kevin Spenst recreates his father's life through a cuckoo's nest of styles that both stand as witness and waltz to the interplay between memory, emotion, and all our forms of becoming.