BC Poetry 2016: "The Dirty Knees of Prayer" by Timothy Shay (Caitlin Press) 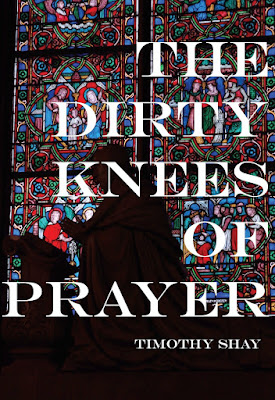 I seem to be the night-watchman of purgatory
singing quiet old songs against the dead hills.
When you come near me with your echo
I don colourful shirts and try to remember a vital dance.

I have first class ferry tickets and yellow absolutions.
The halos are not here, the halos have never been here.
They are up in the attic with the abandoned gift wrap
of goodness, the wobbling promises of new wilderness.

I am never sad long but I record your hidden sadness,
acutely experience your forgotten hidden sorrow,
as I might feel an oppressive and cloying moisture in the air
hours before the advent of an engulfing downpour.

Sorrow and waiting are the two kinds of weather here
with much slow green moss for sitting,
time to patiently eye the defunct pink clock and
click out the missing ‘tick tock’ with mouth and tongue.

I am the watchman of purgatory.
It is always deep night here and the oily coffee
tastes like old lead pencil shavings.
My friends rewrite their examinations as if they’re leaving. 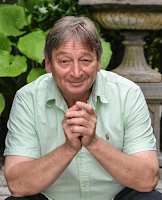 Timothy Shay has contributed to numerous publications including, CV2, Grain, This Magazine and Rolling Stone. His work has been aired on CBC Radio and been anthologized, most recently in Alive at the Centre: Contemporary Poets of the Pacific Northwest (Ooligan Press, 2013). His first book, This Cabin as the S.S. Titanic, was published in 1984.

Here, a thin gruel of hope is celebrated and dark elegies showcased against the former truculence and lying promises of history, the placebo of mythology. Here, the wry humour of mourning in an age of grief. The poems do a rain dance. A five-step tango is executed with the ghost of Kubler-Ross. Songs of ruined breakfast are sung. Rags of pressed roses rise up from an old brittle Bible, its ochre pages ashen by exposure to the sudden light, become the dust on the roads of many summers.

“…Indeed, all Shay’s poems in The Dirty Knees of Prayer give eloquent voice to darkness, while the poet’s command of craft lets us listen absorbedly to the wisdom and insight his poems have to convey." – Tom Wayman

“…Tim is the real thing. He is such a good ‘makar.’ The fact that he is not a household name is simply part of the same crazy cultural affliction that besets the jazz community in North America. But as in jazz, other players know how good Tim Shay is, and that’s what’s important. The Dirty Knees of Prayer is a great baroque feast of beautiful poetry. We’re lucky to have it.” – John Lent