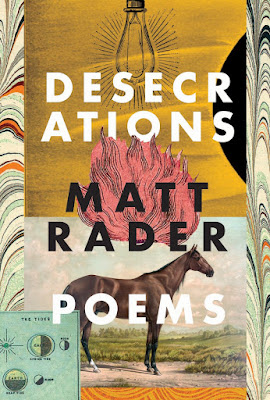 
Everywhere I go I bring myself and I’m lonely.
It’s 1773. Eileen O’Connell keens for Art O’Leary
On a horse across seven miles of County Cork.
“I’m a relic from a time that never was,”
My friend laughs in a late episode of dusk.
His father has died and now he says Kaddish
Below the slow dusty mirrorball of the moon.
There are beautiful old women recalling
Themselves in hotel rooms. There’s Eileen
O’Connell, who drank of the blood of Art O’Leary
And calls now for him to rise up and pay
For his drinks with his own money. Me again.
“I’m an elegiac person,” Larry Levis said before
He died and then again later in all his poems.

Matt Rader is the author of three previous collections of poetry and a book of stories, What I Want to Tell Goes Like This. His work has appeared in journals and magazines across North America, Europe, and Australia. He teaches Creative Writing in the Department of Creative Studies at the University of British Columbia Okanagan.

A luminous new collection of poems about entering middle age, living a life of books, and trying to know what it means to be or not be from or of a place.

If pattern is information, and verse the mind's conversation with Time, Matt Rader's Desecrations animates a theatre of silence we recognize as mystery. Building on an already astonishing body of work, in lines so fluid and uncannily resonant they feel cousined to the dream world, Rader insists that intimate moments bear the cargo of both past and future, antiquity and grim projection, ancestry and unborn selves, resulting in poems of kaleidoscopic beauty and strangeness. These singular, musical evocations eschew argument in favour of a welcoming, arms-wide abandon, and an ethics of porousness and connection. By some alchemy of voice, detail, collision, and disobedience to chronology, Desecrations reveals the imagination as a worthy location of real experience. These poems are a new way to orbit around a locus of damage, a new fabric of signs and singing that we can't help but realize we'd been yearning for all along.

Purchases: From the McClelland & Stewart website or at your local bookstore. $18.95.

McClelland & Stewart * About This Series * More Books, Please!
The copyrights of all poems included in the series remain with their authors, and are reprinted with the permission of the publishers.