BC Poetry 2016: "How Festive the Ambulance" by Kim Fu (Nightwood Editions) 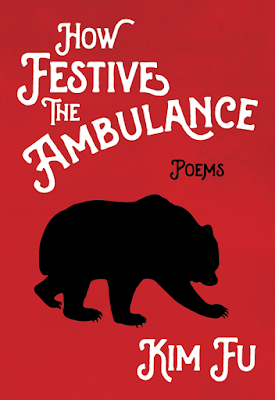 Excerpt from “Lifecycle of the Mole-Woman”

The gatekeeper for the mole people
peers at me over his pink nose, an intimate
bulb of mucus membrane, a mane of whiskers:
perceptive and multidirectional. I cite
my poor vision, hold my hands
in dirt-scoop formation, show off my nails,
grown long and hard and yellow
as curls of cold butter. A delicate
affectation, he says, but he steps aside.
The towers of their metropolis rise like
a dirt-castle sand castle, musty warm
from the inflamed earth. The black forest
of a black forest cake, spongy peat
that bounces back. They cannot look at each other.
Courtship is a blind forward groping.
The mole prince runs his translucent claws
down the useless heavy dimpled doughy
flesh of my backside, finds stubby legs
coated in velvet fur: we are in love. He tenderly
gouges out my eyes. 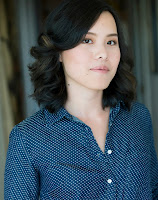 Kim Fu's novel For Today I Am a Boy (2014) was a finalist for the PEN/Hemingway Award, a New York Times Book Review Editors' Choice and winner of the Edmund White Award for Debut Fiction. Fu's writing has been widely published and anthologized, including by The Atlantic, NPR, Maisonneuve and Best Canadian Essays. Fu is a graduate of the University of British Columbia with an MFA in Creative Writing.

A sharp edge of humour slices through Fu's poetry, drawing attention to the distance between contemporary existence and the basic facts of life: “In the classrooms of tomorrow, starved youth will be asked to imagine a culture that kept thin pamphlets of poetry pinned to a metal box full of food, who honoured their gods of plenty by describing ingredients in lush language."

Alternating between incisive wit and dark beauty, Fu brings the rich symbolism of fairy tales to bear on our image-obsessed age. These poems are utterly of-the-moment, capturing the rage, irony and isolation of the era we live in.